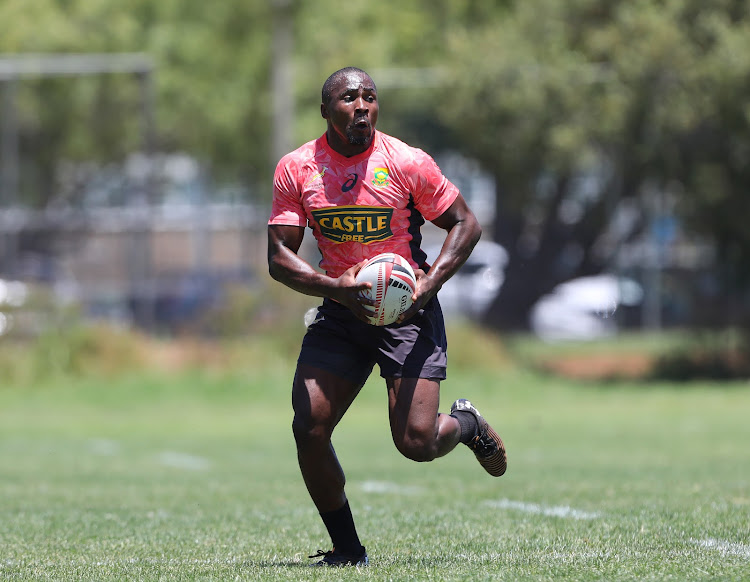 Siviwe Soyizwapi is the new captain for the Blitzbokke.
Image: Carl Fourie/Gallo Images

It is perhaps fitting that this weekend’s 50th instalment of the Dubai Sevens tournament will also kick-off a record six combined men’s and women’s events on this year’s roster.

The three-day event that starts on Friday will bring together 28 teams and while the women got their series going in Glendale Colorado in October‚ the men will kick off their challenge in the desert.

The Blitzbokke will go into the tournament with a new captain with Siviwe Soyizwapi taking over from Philip Snyman but the experience won’t be entirely foreign for the flyer.

Twice last season Soyizwapi served as stand-in captain and helped take the Blitzboks onto the podium and lifted trophies in Vancouver and Singapore.

The Blitzbokke will hope the captaincy doesn’t impact his impressive try-scoring feats. Soyizwapi has touched down 89 times in 28 tournaments.

Soyizwapi is unconcerned‚ pointing rather to the strength of the squad’s collective.

“This is a strong group of players‚ not only in skills and talent‚ but also leadership‚” said Soyizwapi.

“We have a variety of skilful players in the squad‚ some playmakers‚ some steppers and some deadly finishers. If it all comes together in this group‚ we will be successful.

“We said we just wanted to unite as a group and execute as a group. We have a lot that we want to try and a lot of stuff we have worked on‚ so if we can do that together as a group‚ we will be strong.”

Soyizwapi reminded that the SA Rugby Sevens Academy will also play at the same venue and points to the talent in the squad.

“I think we are around 36 guys in total competing for the 13 slots available on any given weekend‚” he said.

“So‚ the competition is fierce‚ but in a good way. We push each other to become better every day and that is a good space to be in as a squad.”

Although competition will be fierce‚ coach Neil Powell has already stated he will be more inclined to stick to the tried and tested.

Powell will also want to bed down a trusty group he can take to the Olympics next year.

Speedsters Seabelo Senatla and Rocko Specman are back in the squad and they will bring valuable experience.

Werner Kok who missed a large chunk of the Blitzboks’ preparations while with Toulouse will make his return to Sevens in the Academy side in Dubai.

The first order of business however will be to make a flying start in Dubai and then Cape Town in their bid to improve on their fourth place finish in last year’s series when Fiji‚ the United States and New Zealand finishing above them.

The Blitzbokke will go into the series with a spring in their step thanks to the feel-good factor created by the Springboks’ Rugby World Cup win in Japan.

“In fact‚ what the Boks did in Japan inspires us to also go out and do great things‚” he said.

“It was massive for the nation and for us as well. It motivated us and we are keen to keep the South African flag flying high.”

Elton Jantjies admits his Rugby World Cup winner’s medal is as heavy as a gong.
Sport
1 year ago

The British and Irish Lions will play two of their three Tests in Johannesburg on their much anticipated tour in 2021.
Sport
1 year ago

Makazole Mapimpi sweeps the floor at the annual Sharks awards

What has been a golden year for Springbok and Sharks winger Makazole Mapimpi was sealed when he swept the floor at the annual Sharks awards that took ...
Sport
1 year ago