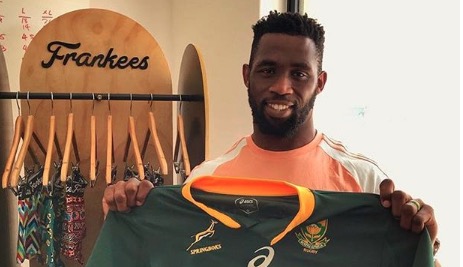 Bok captain Siya Kolisi has been shaken by conversations he's had about gender-based violence in SA.
Image: Instagram/Siya Kolisi

Springbok captain Siya Kolisi has opened up about conversations he has had with women who have fallen victim to gender-based violence. He spoke during a podcast interview for the Kolisi Foundation.

He said their stories reminded him of his childhood experiences, where he witnessed the abuse of his mother and aunt.

“It was so difficult to hear the ladies share their stories. For me, it reminds me of my youth, of what my mother went through when I was young. Hearing that I thought, I remember those visions when I was a little boy just hearing the noises and cries of my mother or my aunt ...”

The foundation has been working with various communities during the lockdown by donating food parcels, but Kolisi says they were soon informed about an even greater need, which is the safety of women.

The foundation responded by donating whistles to give abused women a voice should they need help.

“When I see [a whistle] I just think, 'it's time to play, it's joy,' because that's what we do in the streets and when we play rugby, we have that whistle. Now that usisi gets that whistle and it's a different thing and when she wakes up she thinks, 'I don't have my whistle to keep myself safe'. That freaks me out, it's not right that people live like that.”

Kolisi says it's important for men to take part in the fight against GBV and for schools to talk about it from a young age.

“I remember when I was younger, the first thing I was taught was how to use a condom. Not how to treat a lady or how to be a better man,” he said.

He said men need to call out their peers who are abusive.

“I know that in past, there were situations where I could have said no. But I thought if I'm not doing the violence then it's OK, I don't have to address it. Now I realise that's not right. If you don't say it, then you condone it,” said Kolisi.

As the years pass, the idea of what it means to be a woman is evolving. While previous generations have walked so that women today can run, arguably ...
News
1 year ago

A radical, vocal, feminist man is harnessing the power of social media to stop these women from becoming nameless statistics, writes Alexandra ...
Lifestyle
1 year ago