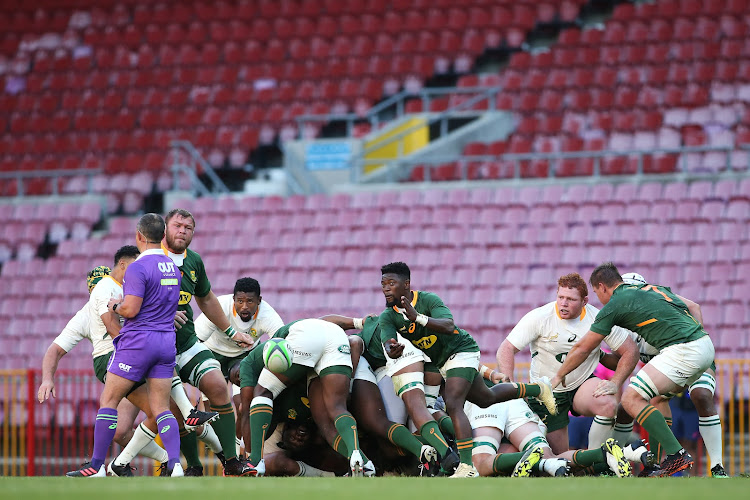 While Saturday’s Springbok Showdown veered more towards substance than style‚ the biggest winner of that game was young Sharks scrumhalf Sanele Nohamba.

He’s in a position where there’s serious national team competition in Faf de Klerk‚ Herschel Jantjies and Cobus Reinach‚ but also has to deal with internal work where Jaden Hendrikse and Grant Williams are going to keep him on his toes.

There was plenty that he got right and even though he didn’t have that many attacking opportunities‚ he gave Springbok green captain Siya Kolisi every reason to smile.

“He was really good and he’s got lots of energy. The one thing I like about him is that he’s not scared to chat and to take control.

"Before we went onto the field‚ I told him I did not want to see him go quiet when it mattered the most.

"He said I mustn’t worry. It was good to see him take control with guys like Elton helping him out‚” Kolisi said.

“He was confident and enjoyed himself. He’s quick. He lets the ball go and it would’ve been nice to see how he went if we got into the 22m area more often.

"He gives the ball nicely to the forwards and gets it quickly out of the breakdown.

"I’m sure we’ll see more of him in the domestic tournament where I think he’ll stick out a lot more and be one of the leaders at the Sharks.

"I’m looking forward to seeing him and the young guys.”

Yaw Penxe from the now-liquidated Southern Kings was another one who made more than a decent impression.

Springbok Green coach Mzwandile Stick has overseen parts of his development and what he saw from the winger made him happy.

“I’m glad you mentioned a player like Yaw Penxe because I can understand what they’re going through.

"I doubt though in two weeks’ time Yaw will be where he is‚ especially with the way he played.

"If I was a coach somewhere‚ I’d surely take that opportunity to bring him into my team‚” Stick said.

“I’ve worked with him since he was 19 when I was still at the Kings and coached him at the Baby Boks and he showed some serious potential.

"He showed aggression under the high balls. I think a number of teams will be after his signature now.

"I’m very happy for him and what’s happening in Port Elizabeth isn’t nice. I am who I am because of EP rugby.”

There was a disappointing showing from Damian Willemse as the young and talented pivot tried too hard.

Springbok Gold coach Deon Davids said Willemse has to be persisted with as everyone has bad games.

“We all know that Damian is a special talent and he can win you games. Rugby players can go through the cycle where they don’t have one of the best nights.

"We can say Damian didn’t have the best of nights but we were under pressure and the conditions were a bit difficult.

"It’s a bit early in the season and with his experience‚ he’ll be able to bounce back and will have learnt some lessons. He’ll come out stronger‚” Davids said.

Local bosses trying to clear a path for Pro rugby

The new PRO14 season kicked off on Friday with the prospect of a name change to include four SA franchises by March next year.
Sport
1 year ago

LIAM DEL CARME | This is the way Super Rugby ends. Not with a bang, but a whimper

Excesses aside, the competition helped establish professionalism in the game and it deserved a more fitting departure
Sport
1 year ago

New Zealand will reprise the domestic Super Rugby Aotearoa competition in 2021, with no Australian or Pacific islands teams involved, but there is ...
Sport
1 year ago

Being a sevens rugby man, Springbok assistant-coach and Springbok Green coach Mzwandile Stick knows exactly how to get the best of players who’ve cut ...
Sport
1 year ago