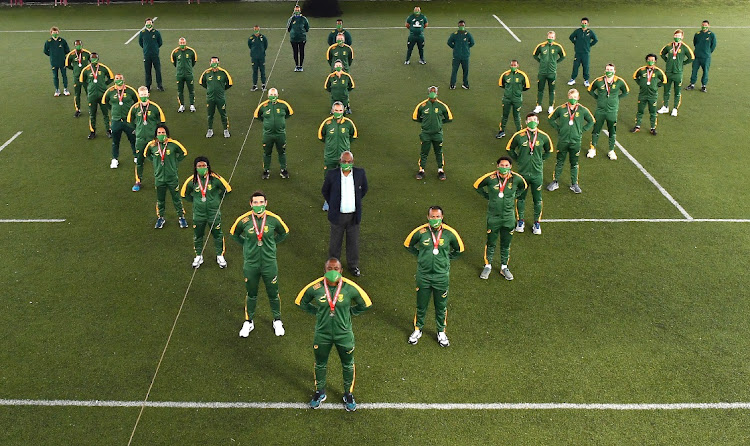 The Blitzboks will set up camp in Japan in early July.
Image: Ashley Vlotman/Gallo Images

The Blitzboks team heading to the Tokyo Olympic Games will hope their time in Kagoshima City also leads to gold when they conclude their preparations in south west Japan in July.

Kagoshima City opened its arms to Rassie Erasmus's Springboks before the Rugby World Cup in 2019 and the team's fine tuning there in no small way helped pave the way to their success at the tournament.

That the Boks arrived just under two weeks ahead of all their major competitors and could acclimatise handed them a competitive advantage in Japan.

This time Kagoshima City will host the Springbok Sevens squad for their final pre-tournament camp before the Olympic Games in Tokyo.

The Blitzboks’ camp will run from July 14 to 23 before they travel to the Olympic Village in Tokyo to join up with Team South Africa.

The Rugby Sevens tournament is scheduled to take place in the Tokyo Stadium from July 26.

Like with the Springboks‚ the Blitzboks will stay at the Sun Royal Hotel in Kagoshima‚ use the nearby Shiranami Stadium for field and gymnasium sessions and will have full access to the Kamoike Dome and swimming pool for the duration of their stay.

Erasmus‚ now director of rugby‚ reflected on a number of positives that tilted the scales in favour of Kagoshima City as a venue of choice for the Springboks‚ and now the Blitzboks.

“The quality of training and accommodation facilities‚ the easy and accessible location of all training amenities and the great weather makes it a top-class training venue‚” said Erasmus.

“All their facilities are world-class and will ensure an excellent environment for Neil Powell and his squad to complete their pre-tournament preparations.”

Powell‚ who was in charge of the Blitzboks when they won the bronze medal at the 2016 Rio Olympics‚ is hoping to maximise their stay in Kagoshima.

“The Springboks spoke highly of the city‚ the training venues and the people and we are keen to experience that‚” said Powell.

“We also hope to feed off the energy from the locals and, from a rugby perspective‚ it will give us an extra week to get used to the conditions in Japan and build that momentum that will be needed to be successful.”

Mayor of Kagoshima City‚ Takao Shimozuru‚ said they were pleased and honoured to host the Blitzboks.

“We will welcome and support you fully‚ in co-operation with Kagoshima Prefecture‚ the Rugby Association‚ and other related organisations‚ in hopes of creating a legacy out of the connection that rugby has created between our city and South Africa.”

Fans in Kagoshima adopted the Boks in 2019, with thousands attending training sessions.

The Springbok legend recently opened up about his work life, studies and ambitions and how he made “so much money” during his first year of ...
Sport
5 months ago

It’s simple — no fans, no bumper payday for economy and SA Rugby

South Africa's economy is set to lose 6.6 billion rand if this year's British & Irish Lions tour goes ahead without fans, according to a study ...
Sport
5 months ago