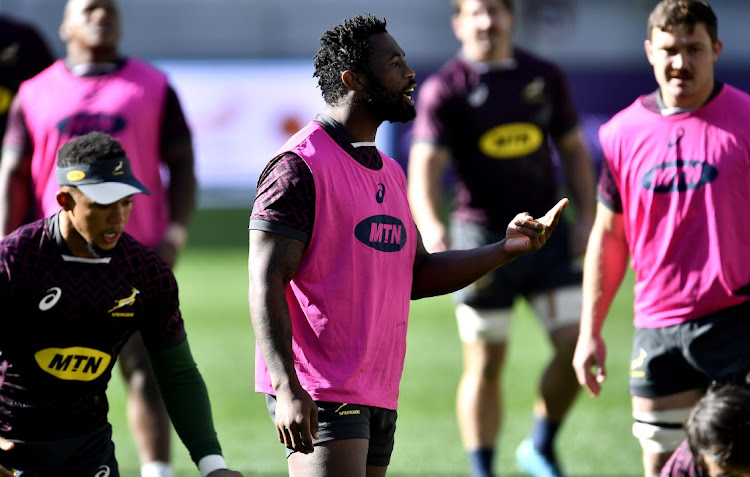 Conversation‚ regrettably only fleetingly‚ turned to a playing room‚ jumping castle‚ swimming pool‚ children’s from-the-belly laughter and golden girl Tatjana Schoenmaker on the eve of the crunch second Test between the Springboks and the British & Irish Lions.

It was a glorious diversion from the acid hurling that has characterised the lead-up to the first and second Tests of the series.

After a tumultuous week Springbok captain Siya Kolisi spoke of the joy of having his family with him on the eve of the second Test against the Lions in Cape Town.

“Jis‚ it’s been amazing‚” said Kolisi‚ backed up by his characteristic grin.

“With everything going on‚ all the pressures‚ all the preparation‚ social media and the news everywhere that is the one place you go to‚ zone in to‚ where your kids don’t care how your day has been and who’s saying what about you.

“When I walk in‚ my kids are smiling‚ joyful to see me. There’s no better feeling in the world‚” said Kolisi before congratulating Schoenmaker for her gold medal and world record in the women’s 200m breaststroke at the Tokyo Olympics.

The respite was brief and inevitably conversation turned to the searing topic of the week.

The bulk of Kolisi and assistant-coach Mzwandile Stick’s online media session was dedicated to the now tit-for-tat verbal jabs being exchanged between the teams.

As was suggested by national director of rugby Rassie Erasmus in his recorded‚ hour-long monologue earlier this week‚ Kolisi confirmed that he felt disrespected by referee Nic Berry in last week’s opening Test‚ which the Springboks lost 22-17 in Cape Town.

“I felt I wasn’t given the same access to the referee. If you watch the game you will definitely be able to see.

“I don’t want to speak about it. It has already happened — there is nothing I can do about it‚” said Kolisi.

Stick accused Lions coach Warren Gatland of destroying the dignity of the series and of challenging the integrity of World Rugby. Gatland last week questioned the late appointment of non-neutral television match official Marius Jonker after the originally assigned official could not travel because of Covid-19 restrictions.

Stick suggested that’s when things turned sour in the series and that the Springboks had the right‚ whether through traditional media‚ or Twitter‚ to get their point across.

“We are not asking for any favours. We just want equal ground‚” said Stick.

There was tacit acknowledgment however‚ that all the talk about the officials leaves the series prone to inconclusive‚ unpalatable outcome.

“I wouldn’t love the series to be all about the decisions that were taken by the officials‚ or the whole vibe about the coaches off the field‚” said Stick before adding: “This series deserves a good show.”