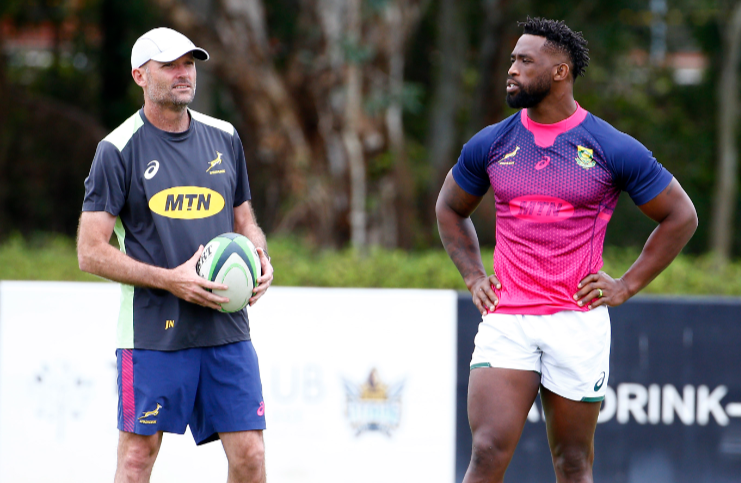 Springbok coach Jacques Nienaber has sidestepped the issue of players like captain Siya Kolisi being snubbed by World Rugby for Player of the Year awards nominations.
Image: Tertius Pickard/Gallo Images

Springboks coach Jacques Nienaber on Tuesday successfully sidestepped the controversial snubbing of SA players by World Rugby in the Player of the Year awards.

Earlier this week World Rugby set tongues wagging when they excluded Springbok players from the list of Player of the Year award nominees, despite strong individual performances during the season.

On the list of achievements over the past few months, the Boks have beaten the All Blacks, won the British & Irish Lions series and are currently unbeaten on their outgoing tour after wins over Wales and Scotland.

During these results, players like captain Siya Kolisi, Eben Etzebeth and Sbu Nkosi were impressive as the Springboks returned to the top of the rankings, replacing the All Blacks.

“In terms of the nominations, obviously we trust and respect the process to get to the nominations,” Nienaber said during his squad announcement where Handré Pollard, Cobus Reinach and Lood de Jager replaced Elton Jantjies, Herschel Jantjies and Franco Mostert in the squad to face England at Twickenham on Saturday.

“We are very happy for the guys who were nominated. Some of our players in the past have been nominated and it was very special for them. We wish all the nominees the best of luck with the process.”

Centre Lukhanyo Am is the only South African to be nominated at the awards for the International Rugby Players Men’s Try of the Year Award for his sublime five-pointer during the victory of SA “A” over the British & Irish Lions in July.

SA Rugby's Rassie Erasmus performed "water boy" duties last weekend in the win over Scotland but Nienaber could not confirm if he will doing the same against England.

“We haven’t discussed that yet. We will probably make a decision later on Wednesday or Thursday. “