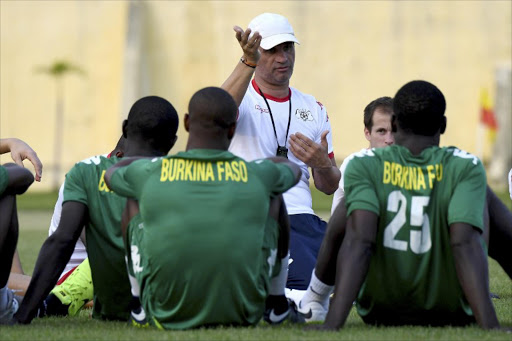 Burkina Faso's Portuguese coach Paulo Duarte speaks to his players during a training session in Libreville on January 29, 2017 during the 2017 Africa Cup of Nations football tournament in Gabon.
Image: GABRIEL BOUYS / AFP

Alongside a trio of the continent's most successful teams in the Africa Cup of Nations semifinal line-up, Burkina Faso's ambition burns brightly as they seek another chance to win their first major title.

Four years ago, Burkina Faso were surprise runners-up at the Nations Cup in South Africa and have confirmed that potential with a place in the final four at the tournament in Gabon.

Now they are looking to book another place in the final when they meet Egypt in the last four on Wednesday.

"We dream of doing better than in 2013. It will not be easy. We cannot know what the future will be, only God knows," said their coach Paulo Duarte.

"The important thing is that the players do not lose their humility."

Burkina Faso, who beat Tunisia 2-0 in the quarter-finals on Saturday, have progressed even though serious injury has cost them two key players in the first round.

Jonathan Pitroipa, named the best player of the 2013 tournament, and Spanish-based striker Jonathan Zongo were ruled out in the opening week after knee injuries.

"But we have other players. This is a team that I started building seven years ago and I know all their abilities," Duarte added as Burkina Faso prepared for the semifinal.

"They are a team capable of giving a fantastic show. The quality and the confidence is there."

Burkina Faso have developed a level of consistency over the last decades and since 1996 have qualified for 10 of the last 12 Nations Cup finals tournaments. They are also well placed in the early stages of Africa's qualifiers for the next World Cup.

But to make the breakthrough to Nations Cup success will be tough in the closing stages in Gabon.

Between them the other semifinalists - Cameroon, Egypt and Ghana - have won half of the previous 30 Nations Cup tournaments, representing a heavyweight presence in the final four in Gabon.

But Egypt are just emerging from seven years away without participating in the finals and were fortunate to win Sunday's quarter-final over Morocco.

Cameroon have a youthful squad who held on grimly to force their quarter-final against Senegal to a penalty shootout which they won.

Ghana, whose captain Asamoah Gyan is doubtful for the semis, have now reached the last four of six successive Nations Cups since 2008 and are the new favourites.

They play Cameroon in Franceville on Thursday.