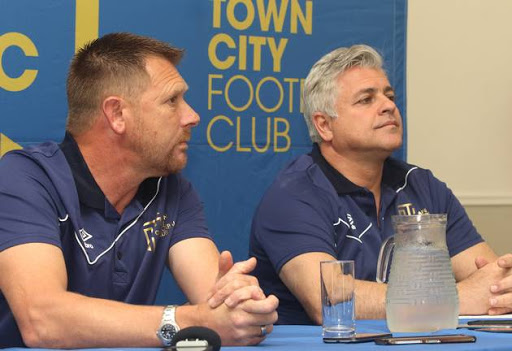 Cape Town City owner John Comitis says he knew an offer would be made for coach Eric Tinkler‚ but did not expect the former Bafana Bafana midfielder to accept it.

City confirmed on Thursday that Tinkler had walked out on the club after one season of a three-year contract‚ with SuperSport United his likely new destination.

Matsatsantsa are set to unveil Tinkler as their new head coach at a press briefing on Thursday at 3pm.

The sudden nature of Tinkler’s departure is borne out in the fact that he recently purchased a house in Cape Town and was due to move into it in 10 days time.

“Quite frankly‚ we are very disappointed‚ the way the thing has been handled is not how I would have liked‚” Comitis told Times Media Digital.

“Eric didn’t give me a chance to compete [financially] with the offer and it was something we could have matched.

“All that was said previously was about commitment‚ loyalty and the future. I thought I had Eric’s trust. We were already in discussions about a new contract for him.

“To a large extent I was blind-sided because although I knew an offer would be made to Eric‚ it was a surprise to me that he would even consider it.

"That is disappointing‚ along with the fact that we were not given the opportunity to match the offer.”

Comitis hints that it was perhaps the fear of not knowing whether he could repeat the success of the 2016/17 campaign that drove Tinkler’s thinking.

The coach led the team to third in the Absa Premiership and claimed the Telkom Knockout in the club’s first season in the top-flight after buying the status of Mpumalanga Black Aces.

“There are probably a few things at play‚ and after such a fantastic season‚ you never know what that does to people.

Comitis would not be drawn on candidates to replace Tinkler‚ but confirmed he has identified an individual.

“The new coach will be of the same mind [as Comitis] in terms of the type of players we have purchased and the way Cape Town City wants to play‚” Comitis says.

“The coach we select will pick up the momentum we have created. With the homework I have done‚ I believe I have possibly found a gem.”