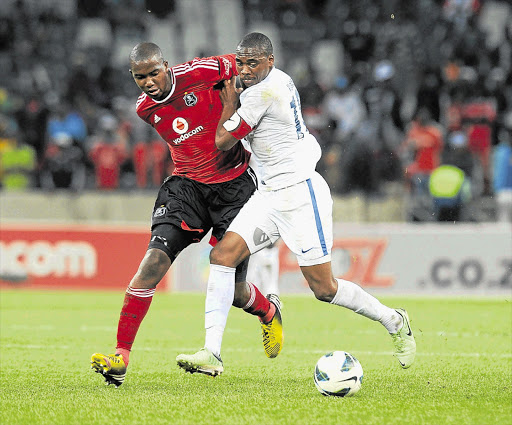 Lehlohonolo Masalesa (on the right) has been named captain.
Image: BACKPAGEPIX

South Africa enter a competitive arena for a second time inside a month but the team they will field against Tanzania in the Cosafa Cup on Sunday has little in common with a magnificent victory this month in Nigeria.

A few might call this side ‘Bafana Bafana’ but there is no fooling the public that this is anything but a patchwork team.

New coach Stuart Baxter has done his best to make what he can of limited ingredients and been trying to talk up the development aspect of the event‚ where South Africa have had a bye past the group stages into Sunday’s quarterfinal at Royal Bafokeng Sports Palace.

The coach has been aware it is likely to be even worse for him later in July when he must find players for the two African Nations Championship (Chan 2018) qualifiers against Botswana.

The South African Football Association‚ though‚ have clearly earmarked Cosafa and Chan as tournaments in which SA will field developmental combinations‚ with the senior team left to focus on qualification for World Cup 2018 and the 2019 Afcon.

On Sunday‚ Baxter uses the basis of the side who played at the U-20 World Cup in South Korea in May‚ propped up by the likes of Lorenzo Gordinho‚ Mario Booysen‚ Judas Moseamedi and Lehlogonolo Masalesa.

Masalesa‚ the articulate ex-Wits and Orlando Pirates midfielder‚ now at Larisa in Greece‚ has been named as captain. There is also Nduduzo Sibiya from Lamontville Golden Arrows‚ one of the finds of the last season.

Aubrey Ngoma would have been an added boost but aggravated an old knee injury that he has been carrying through the season‚ finally snapping the affected ligament in training on Tuesday and now being set for months on the sidelines.

If it was unlucky and not Safa’s fault‚ it is no wonder clubs are so reticent to let their players go off on international duty and why so few agree to such call-ups outside the dates when they are obliged to do so by the Fifa’s international calendar.

South Africa’s entry comes at the quarterfinal stage because they are one of the six seeded teams‚ on top of being defending champions.

Opponents Tanzania have had to come through three games in six days in the first round and‚ despite having close to a full strength side‚ looked far from impressive‚ even if they have a physical presence about them. Tactically they have been weak and technically‚ inept.

The 139th Fifa-ranked East Africans are a guest team in the tournament‚ filling in for Comoros Islands‚ who did not enter.