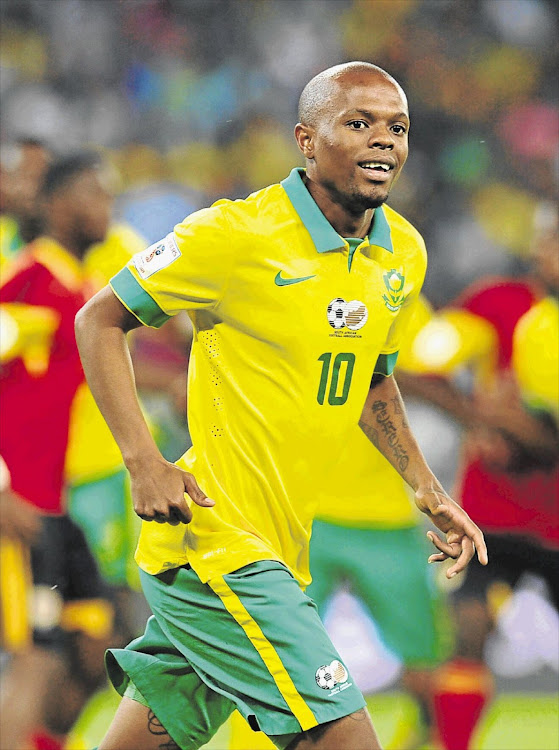 Playmaker Thulani Serero was not selected for Dutch side Vitesse Arnhem after pulling up with a hamstring injury last week. File photo.
Image: MUZI NTOMBELA/BACKPAGEPIX

It was a mostly disappointing weekend of club action for South Africa’s Bafana Bafana-bound overseas stars as they head for national team duty in the FIFA World Cup qualifier double-header against Cape Verde starting on Friday.

There will be an immediate concern over the fitness of playmaker Thulani Serero‚ who was not selected for Dutch side Vitesse Arnhem after pulling up with a hamstring injury last week.

Serero sat in the stands and will have to be assessed by the Bafana Bafana medical staff as to his availability for Friday’s away clash in Praia.

Striker Tokelo Rantie picked up a straight red card three minutes before halftime for Turkish outfit Genclerbirligi‚ the first sending off of his career‚ and just his second booking of any kind in almost four years.

Rantie was punished for a swinging elbow into the face of Fenerbahce defender Hasan Kaldırım as the latter pulled him to the floor in a tussle for the ball.

Bongani Zungu did not make it off the bench for Portuguese side Vitoria Guimaraes as his difficult start to the new campaign continued.

Zungu was subbed before the hour-mark of the 5-0 loss to Sporting Lisbon on August 19 and relegated to the bench by coach Pedro Martins for this weekend.

There is also still the possibility he could leave Vitoria before the close of the transfer window on Thursday‚ though any move will now be complicated by his presence in West Africa with the national team.

Andile Jali played for 83 minutes as his Belgian side KV Oostende suffered a fifth straight league defeat this season when they went down 4-3 to Antwerp. It has been a horror start to the campaign for them.

Striker Kermit Erasmus was again left out of the match-day squad by French Ligue 1 side Stade Rennes and has not played a single minutes this season.

His last competitive football was on loan at Lens at the end of last season on May 19.

Whether that has an effect on his sharpness in front of goal remains to be seen.

Keagan Dolly did make his first start of the campaign when he played 76 minutes for French side Montpellier as they lost 2-1 at Dijon.

And Kamohelo Mokotjo played 65 minutes for English Championship side Brentford as they were held to a 0-0 draw at home by Wolves. Brentford are still looking for a first league win of the campaign.

Ironically‚ outside of those players picked for national team duty‚ there were some fine performances by overseas-based players.

Bafana Bafana and SuperSport United winger Aubrey Modiba says he has learnt some valuable lessons from the many stories of retired soccer stars who ...
Sport
4 years ago

Lebogang Phiri put in a good shift as French Ligue 1 side Guingamp won 2-0 at home to Strasbourg‚ while in Ligue 2 Lebo Mothiba was on target for Valenciennes as they won 4-1 at home to Niort.

May Mahlangu also had a fine game as Romanian side Dinamo Bucharest won 3-1 at FC Voluntari.

Thabo Cele made his debut for Benfica B as they suffered a 1-0 loss at Acádemico de Viseu in the country’s second-tier‚ while Joel Untersee was a late sub for Empoli as he debuted for the Serie B side in their 1-1 draw at Ternana.

Lars Veldwijk came on for the final 15 minutes for Dutch side Groningen as they won 2-1 at home to Utrecht.