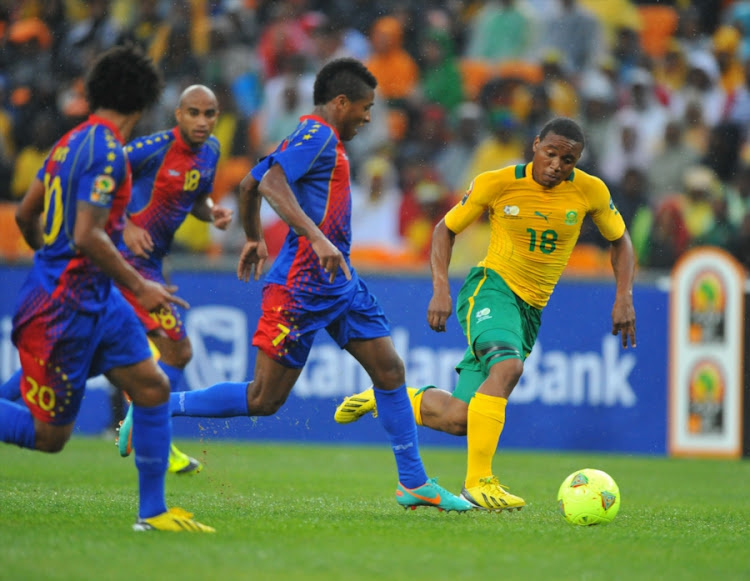 A file photo of Thuso Phala of Bafana Bafana attacking on the wing during the African Cup of Nations match between South Africa and Cape Verde Islands at the National Stadium on January 19, 2013 in Johannesburg, South Africa. Bafana face off with the Islanders in a crucial 2018 World Cup qualifier double-header in September 2017.
Image: Duif du Toit / Gallo Images

Cape Verde Islands have handed a first call-up to French-based defender Danilson da Cruz for the FIFA World Cup qualifier double-header against South Africa early next month as their football association has been plunged into turmoil by the sacking of the president Victor Osorio and the entire board.

Danilson‚ who was born in France‚ plays for Ligue 2 side Stade Reims and earns a first call-up from coach Lucio Antunes.

The 31-year-old has played exclusively in the lower leagues in France and he made his move to Reims at the start of last season.

He has played every minute of the campaign so far for his team‚ including a 3-0 loss to Lebo Mothiba’s Valenciennes in the French Cup on Tuesday.

Dino Ndlovu’s blistering start to the new 2017/18 season continued when he netted a crucial goal for Azerbaijan club Qarabag to steer his side into ...
Sport
4 years ago

Antunes‚ desperate to turn around the spiraling fortunes of his side‚ has also recalled midfielder Platini after a two-year absence.

The 31-year-old joined Romanian top-flight side CSMS Iași at the start of this season after a spell in the United Arab Emirates with Dibba Al-Hisn.

Cape Verde’s poor performances on the pitch have seen changes in the boardroom as well after an Extraordinary General Assembly of the country’s football association voted to oust president Osorio in a vote that ended 9-2 in favour.

It meant the entire board was sacked as well and leaves the association rudderless to a certain extent before a new president and board can be voted in by the September 30 deadline.

The under-performance of the national team was the major reason for the ousting of Osorio‚ though the domestic league had also seen multiple challenges in the most recent campaign.

Cape Verde fell well short of topping their pool in qualification for the 2017 Africa Cup of of Nations‚ while they have lost both of their first two games in their qualifying pool for the 2018 World Cup.

Seven of their last 10 matches have ended in defeat‚ including their last four at home‚ with only victories against minnows São Tomé E Príncipe‚ Luxembourg and Kenya.

They have been in freefall in the FIFA rankings‚ plunging to number 115 in the world and number 31 in Africa. This having held top spot on the continent not even three years ago.

The first match between Bafana and Cape Verde will be played in Praia on September 1‚ with the return in Durban four days later.

Banyana Banyana have been handed a gentle first round draw at the 2017 COSAFA Women’s Championships that will be staged in Bulawayo‚ Zimbabwe‚ from ...
Sport
4 years ago