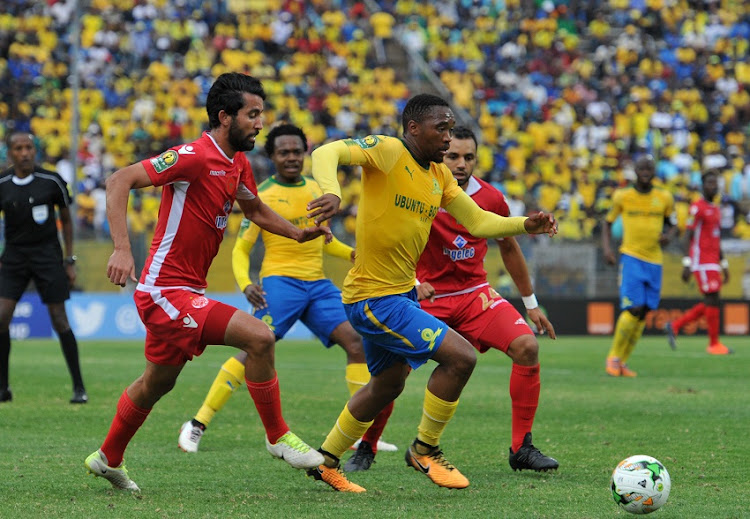 Mamelodi Sundowns coach Pitso Mosimane got his wish when his charges beat Wydad Athletic and in the process also stopped the Morocco side from scoring in a heated Caf Champions League quarterfinal‚ first leg‚ clash at Lucas Moripe Stadium in Atteridgeville on Sunday afternoon.

Yannick Zakri beat Wydad goalkeeper Ahmed Reda Tagnaouti with a low shot to score the only goal of the match after he was beautifully set up by the nimble-footed Themba Zwane in the 70th minute.

It was heated quarterfinal encounter and the Wydad technical staff nearly came to blows with members of the Sundowns bench a few minutes before fulltime.

The Wydad bench charged at their Sundowns counterparts and it took calm heads to help smooth the tense situation.

Mosimane said on the eve of the match he was targeting a clean sheet against the Moroccans and such a result would give the Brazilians a massive advantage going into the second leg in Casablanca on Saturday night.

His charges did exactly as they were asked by their coach and worked very hard to get the result against incredibly tough opponents.

It was a tightly contested encounter and clear-cut chances were few and far between in the first half.

The visitors were quite happy to sit back and absorb the early pressure as Sundowns tried to break them down.

Steve Komphela was incensed at his integrity being brought into question by an opposing team official as Kaizer Chiefs and Bidvest Wits’ 1-1 Absa ...
Sport
4 years ago

But Wydad were organised at the back and when Bafana Bafana international Percy Tau made a nuisance of himself‚ the Moroccans quickly closed him down. And when Tau managed to give his markers the slip‚ his final pass often let him down.

Given how tight this match was in the opening period‚ it was no surprise that the two teams were still locked at 0-0 at half time.

Sundowns returned with greater purpose in the second period‚ determined to find a way past the double-decker bus Wydad had parked in the back.

After trying to get behind the visitors for the better part of the afternoon‚ Sundowns finally found the opening they were looking for when Oupa Manyisa‚ Tau and Zwane combined to set up Zakri in the 70th minute.

It was a goal straight from the Sundowns training ground and the passing between the Brazilians’ players seemed to be mesmerised their Wydad counterparts.

The visitors only woke up after the stadium erupted in wild celebration.

Sundowns offered fans wearing yellow free entrance in a bid to create an intimidating atmosphere for the Morocco visitors.

The crowd certainly played their part and there were times when the stadium reverberated with the kind of noise that the home players would have appreciated.

The Brazilians will leave on Monday for the return leg in Morocco and they will stay in North Africa in anticipation of a semi-finals first leg clash‚ which is likely to be against USM Alger of Algeria on September 29. - TimesLIVE