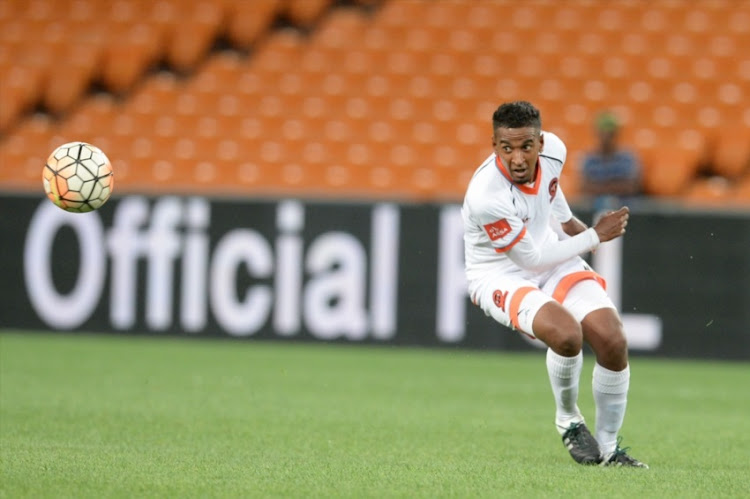 Mogamat Jacobs of City during the Absa Premiership match between Kaizer Chiefs and Polokwane City at FNB Stadium on February 23, 2016 in Soweto.
Image: GALLO IMAGES

Polokwane City coach Bernard Molekwa is delighted to have midfielder Mogamat Jacobs back on the pitch after 18 months on the sidelines with what looked a career-ending injury.

Jacobs played for City in their 2-0 loss to Ajax Cape Town on Friday and was neat and tidy on the ball‚ running out of legs and being replaced by Puleng Tlolane with a couple of minutes to go.

The 28-year-old thought he would never play football again after a horrific car accident in March 2016 just a few days after he had helped City to a 1-1 draw at Kaizer Chiefs.

He was lucky to be alive after being left in a critical condition following a late night accident in the Polokwane CBD‚ but now the player named ‘Kaka’ is able able to resume his career and is very much part of the City plans.

Ajax Cape Town calmed their early season jitters with a 2-0 Premier Soccer League victory over Polokwane City at a wet and windy Cape Town Stadium on ...
Sport
4 years ago

“After he recovered from the accident‚ he has been working hard at training. He played for the MultiChoice Diski Challenge side to gain fitness‚” Molekwa said.

“With what he gave [against Ajax]‚ it was OK. I made a tactical substitution to take him out the game‚ but his legs also couldn’t carry him anymore after being out for such a long time.

“He’s a very good player‚ he’s part of our plans and we still believe he will add a lot of value to this club.”

Cape Town-born Jacobs is likely to return to the Mother City for Friday night’s clash against Cape Town City.

Before then‚ the Limpopo side host Free State Stars on Tuesday.

Jacobs was previously a stalwart with Milano United in the National First Division‚ making 83 appearances for them in all competitions in three seasons. - TimesLIVE