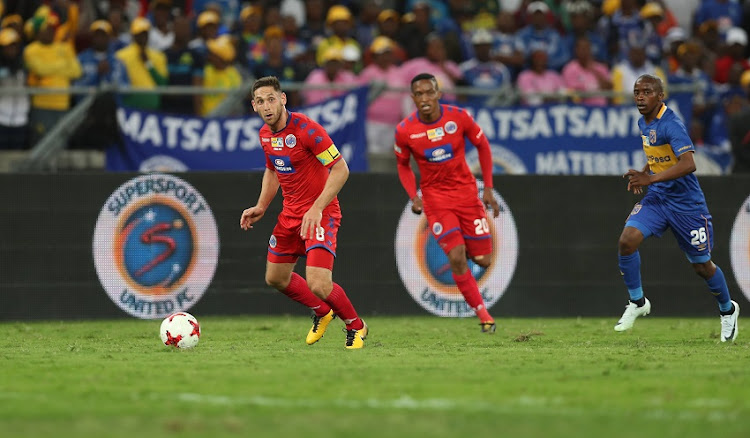 In what proved to be a wide open final which could have gone either way, a 10-man SuperSport won on penalties to deny Benni McCarthy what was going to be his first cup glory in this tenth edition of the MTN 8.

Goalkeeper Ronwen Williams was a hero for Amatsatsantsa a Pitori, saving Lyle Lakay and Judas Moseamedi penalties to give his side the second trophy in this competition after last winning it in 2004 here in Durban.

This cup success came only after three months SuperSport had won Nedbank Cup in this very ground where they dismantled Orlando Pirates 4-1.

The win also further confirmed SuperSpport's dominance in winning trophies in the PSL are as this was their seventh cup success in 21 years since the league was founded. They also have three league titles in their cabinet.

It was ten minute from time when Eric Tinkler's team staged a come back, with Thabo Mnyamane getting the all-important equalizer in the 80th minute after receiving a good pass assist from striker Bradley Grobler who was kept quite for the better part of the game.

City had gone ahead against the run of play in the 23rd minute of the first half when Sibusiso Masina slotted home after getting an assist from Abrahin Seedat on the left flank.

Masina's goal came when SuperSport were dominating the match in which they had three corners inside the first 20 minutes, with Aubrey Madiba leading their onslaught, overlapping on the left flank.

But as soon as City had taken the lead midway through the first stanza the complexion of this match changed completely. It was during this time that veteran midfield maestro Teko Modise started to connect with his teammates dishing some telling passes much to the frustration of Tinker in the SuperSport dugout.

One of Modise's passes went to striker Lehlohonolo Majoro who should buried it but his lack of sharpness let him down in the 28th min.

SuperSport resistance went pear-shaped when striker Thabo Mnyamane was forced to go off eight minutes from time with what looked like a groin injury when Tinkler had already exhausted his substitutes.

At that time the novice McCarthy still had a substitute to make, bringing on striker Judas Moseamedi for defender Mpho Matsi.

Even though from then on the game went to City's way, McCarthy's team failed dismally to capitalise on their extra-man even in the extra-time when SuperSport had defender Clayton Daniels and striker Grobler heavily limping with injuries they sustained in the bruising battles.

Even though McCathy came with a promising record to this match he was not expected to humble his former and senior Bafana Bafana teammate Tinkler, another young South African coach whose stock has been rising in recent years.

SuperSport win brought sweet revenge in their favour after losing 2-1 to City in the Telkom Knockout final last year. Ironically it was Tinkler who was sitting on City's bench when they beat Amatsatsantsa.

Although the buzz was fantastic at the stadium, only an estimated 20 000 spectators turned up to watch the two teams who hardly have any connection with the people and the City of Durban.

The turn-out was not surprising as there was no vibe or fans blowing vuvuzelas in the nearby townships before kick-off.