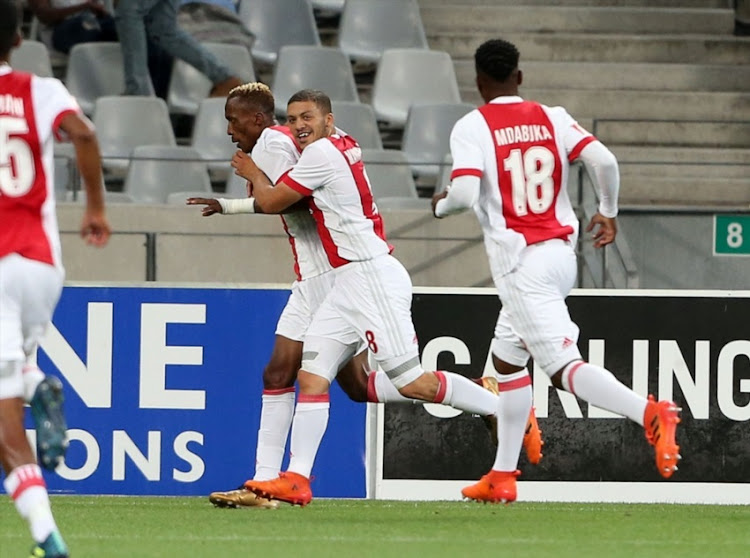 Ajax Cape Town won three vital points in a 3-0 victory over Orlando Pirates at the Cape Town Stadium on Wednesday in a match in which they hardly had the ball and yet came away with an emphatic scoreline.

Yannick Zakri scored twice and Musa Lebusa got the other as Ajax put away all three of their efforts on goal in match in which Pirates had some 80 percent of the possession and a myriad of chances, yet came away with nothing.

It is a result, however, match overshadowed by a protest over the status of Tendai Ndoro, Ajax’s new signing who is with his third club in a single season in contravention of FIFA regulations.

Pirates made a protest over Ndoro before kick off despite the Premier Soccer League’s Dispute Resolution Chamber clearing him to play earlier in the day in a decision that has since been appealed by the league itself.

If the tactic was to try and instill some doubt into the minds of the Ajax management and knock some confidence out of the Zimbabwean striker, it did it seem to work.

Ajax went ahead and played him anyway, confident that he was eligible to play after the DRC decision and despite the appeal.

The first corner of the game delivered the first goal after just 12 minutes as Ajax skipper Lebusa rose in between the defence to head home for his first goal in just over two years.

But it was Pirates who dominated the first half midfield battles and with the pace of Luvuyo Memela were constantly knocking on the door of the Ajax penalty area, where Mario Booysen made some timely interventions.

One of them saw him collide with his own goalkeeper Brandon Pietersen, who eventually had to go off, just before the end of the first half, suffering from concussion.

Before that Ajax coach Muhsin Ertugral made a tactical switch and brought on Ndiviwe Mdabuka in the 31st minute to try and strengthen up the midfield, where Pirates were running through at will.

A minute later Ajax scored a second with a three touch counter attack from deep in their own half with Grant Margeman setting away Ndoro down the wing t provide a square ball, which was then tucked away by Zakri in only his second game since joining from Sundowns.

Pirates kept rotating the ball and trying to prise an opening but did not have enough shots on goal.

There was a horror miss from Innocent Maela 10 minutes into the second half and a fine save from substitute ‘keeper Jody February to deny Memela.

Coach Milutin Sredojevich added Lyle Foster and Thamisanqa Gabuza to attack to try and break down the home defence but Justin Shonga had two poor efforts late in the game as Ajax held out … and then caught Pirates on a sole counter attack in the second half with Siyanda Zwane setting up Zakri to make it 3-0 in the 83rd minute.