Sundowns cruise past AmaZulu to stretch their lead 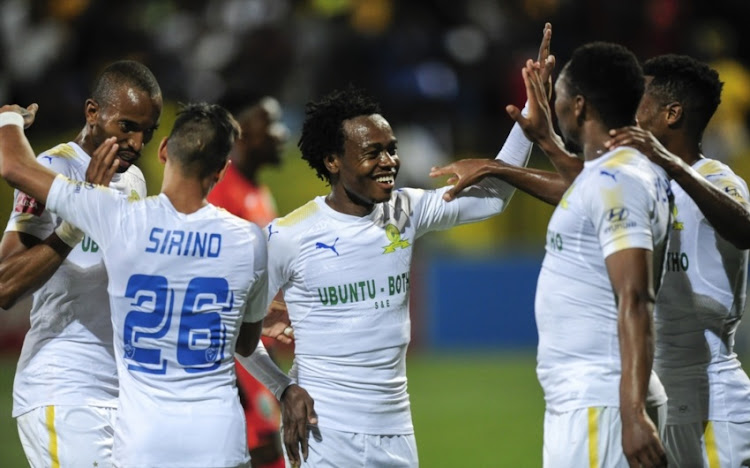 A well-taken brace by man-of-the-match Sibusiso Vilakazi helped Mamelodi Sundowns to beat AmaZulu 3-1 during their entertaining and drama filled PSL encounter at King Zwelithini Stadium on Friday where they also stretched their lead at the top of the standings to seven points.

Vilakazi’s two goals in the second half added to a penalty that was converted by defender Ricardo Nascimento early in the match while AmaZulu’s consolation was scored by Mhlengi Cele before the break.

Coach Pitso Mosimane will be satisfied with the healthy seven points lead with seven matches to go and it is up to other title chasers to close the gap as Sundowns only return to league action on April 4 when they host Chippa United.

In the next three weeks, Sundowns have two Caf Champions League, first round matches against little known Rayon Sports of Rwanda and a potentially tricky Nedbank Cup, last 16 clash against EC Bees.

For tenth placed AmaZulu, who are likely to be overtaken by the end of the weekend by their rivals in the middle of the table, they return to league action with a tough trip to Johannesburg to face Kaizer Chiefs at FNB Stadium on March 17.

The best attacking chance of the match arrived in the 13th minute when AmaZulu midfielder Michael Morton unleashed a powerful close range shot that was cleared by Sundowns defender Wayne Arendse off the line.

However, it was the Brazilians who took the lead in the 24th minute when Nascimento beat AmaZulu goalkeeper Boalefa Pule from the penalty spot after midfielder Percy Tau was brought down by defender Sadat Ouro-Akoriko.

AmaZulu equalised after 36 minutes through Mhlengi Cele who blasted home an indirect free kick from inside the penalty box after Sundowns goalkeeper Brimah Razak touched the ball with his hands after he failed to control a back pass by Nascimento.

Sundowns retook the lead four minutes after the break through a shot by Sibusiso Vilakazi after he was released by Zwane as they caught the AmaZulu defence flat footed.

The match was put beyond doubt on the hour mark in a controversial circumstances when Vilakazi registered his brace by pouncing on a loose ball that fell on his path after rebounding from the upright from Zwane’s shot.

The match was halted for about five minutes after Vilakazi’s goal as AmaZulu fans threw missiles on to the pitch to protest that Zwane was on an offside position when he received a pass from Tau before his shot rebounded off the upright.