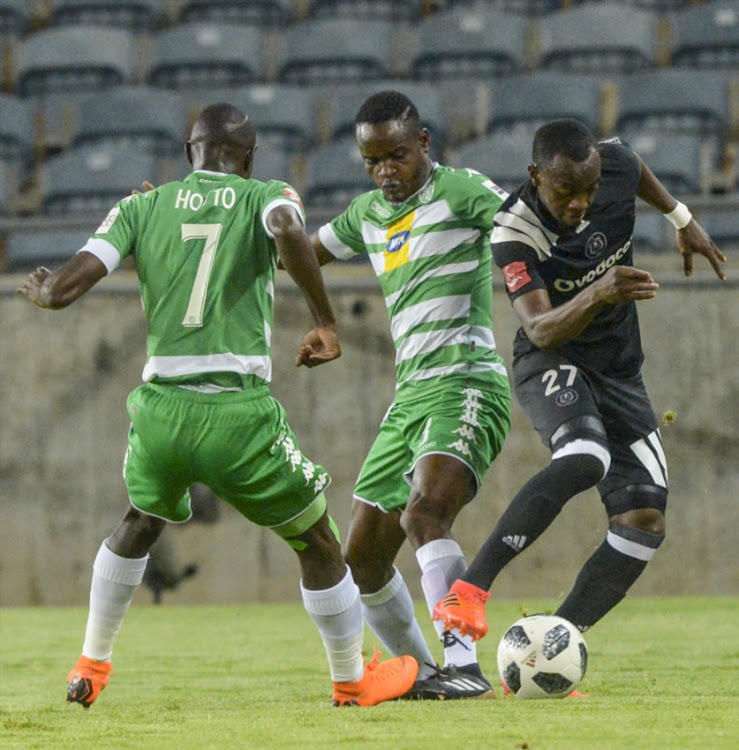 Augustine Mulenga timed his first Orlando Pirates goal to perfection when it helped his team beat a combative Bloemfontein Celtic 2-1.

Mamelodi Sundowns' win against Chippa United meant Pirates stayed second with 45 points but their title fate is still firmly in their hands. Pirates are point behind Sundowns, who still have a game in hand.

In what was an exciting game that saw the visitors finish with 10 men, Pirates were the better side but Celtic kept them on a tight leash.

Celtic had their fair share of chances but their profligacy in the final third may come to haunt them in their hunt for a top eight spot.

After Justin Shonga stung Patrick Tignyemb's palms with a spicy freekick in the second minute, it was a case of when, not if the hosts were going to break the deadlock.

The opening goal came 15 minutes later when Musa Nyatama nodded home Shonga's corner. It was an incessant black attacking wave that battered Celtic's defence but the side in green battened down the hatches.

Thembinkosi Lorch was writing speedy cheques the Celtic defence couldn't cash and he should have had a goal to show for his efforts.

While his sixth minute chance went narrowly wide of Tignyemb's net, he forced an excellent save from the Cameroonian stopper 20 minutes later.

His decision-making also let him down just before half-time when on a rasping counter attack that caught the Celtic defence napping, he chose to attempt a cross shot instead of cutting back and passing to an advancing Shonga.

Such was Pirates' dominance, Celtic only had two chance but they caused serious flutters for the decently packed Pirates faithful.

Jacky Motshegwa, who was bulldozing through the Pirates midfield, played a key role in setting up Victor Letsoalo in the 13th minute but Marshall Munetsi's intervention ensured Siyabonga Mpontshane's goal wasn't breached.

Motshegwa was also denied a chance to equalise just before the break after Ndumiso Mabena broke free on the right hand side and threaded in a delicate cross. Mthokozisi Dube's intervention forced Motshegwa to fire over the bar from point-blank range.

Celtic though were fortunate third time round just after the break when Lorenzo Gordinho bundled the ball in from a corner after Pirates made heavy weather of the clearance.

The impact of the goal reverberated around the ground as the silencing of the Pirates allowed the small but vocally gifted Celtic bunch perched on the north side to own the singing stakes.

Mabena, who's off the ball runs were causing Pirates endless headaches, should have put Celtic in the lead in the 62nd minute.

Despite the attentions of a Pirates defender, Mabena's left-footed poke was well saved by Mpontshane after Tshepo Rikhotso was inexplicably given space to run and cross on the right hand side.

Mulenga sealed the three points 11 minutes later after his rasping drive from just outside the box gave Tignyemb no chance.

His combination with Thabo Matlaba was the master key that unlocked the Celtic defence and proved to be the body blow that permanently winded the visitors.