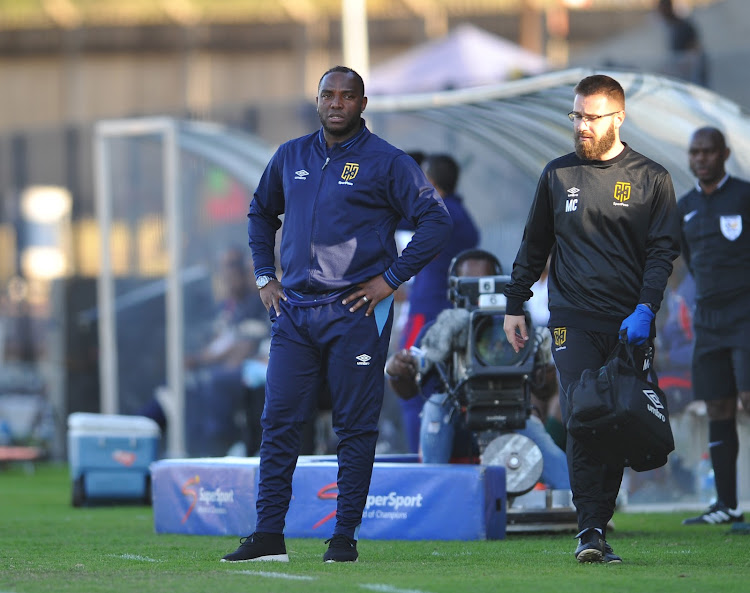 Benni McCarthy described Siphelele Mthembu as “my main man” and made a comparison with Swedish star Zlatan Ibrahimovich as he looks to the new signing to score the goals that Cape Town City have been lacking over the last season.

Newly arrived after winning the Nedbank Cup with Free State Stars‚ the 31-year-old centre forward has already grabbed a goal for City in his first three games although he is unlikely to play in Saturday’s Absa Premiership fixture against Lamontville Golden Arrows after being injured last weekend.

Mthembu had to go off after a horror tackle from Rushine de Reuck of Maritzburg United in City’s 1-0 away triumph in the quarterfinal of the MTN8 last Sunday and is likely to be rested in order to be fit for the semifinal against Mamelodi Sundowns on August 25.

“‘Shaka Zulu’ is the man. He gives us such a completely different outlook this season‚” enthused McCarthy about the former Kaizer Chiefs and Orlando Pirates striker‚ whose KwaZulu-Natal roots earned him the nickname.

“Last season we were a good football-playing team but we lacked bite. But we didn’t have that killer instinct‚ we didn’t have a striker who gives us that depth and that is able to hold up the ball and when we have out back up against the ropes we are able to play it up to the striker.

“He’s come in and he’s given us that outlet so we are a complete side now. Now we can fight‚ we can protect and we can play under pressure as well because we’ve got a striker that gives us that Zlatan Ibrahimovic aura.

“We are very happy to have him in our team‚” added McCarthy‚ who revealed he had chased Mthembu’s signature throughout last season.

In the last campaign‚ City managed only 26 goals from their 30 league games.