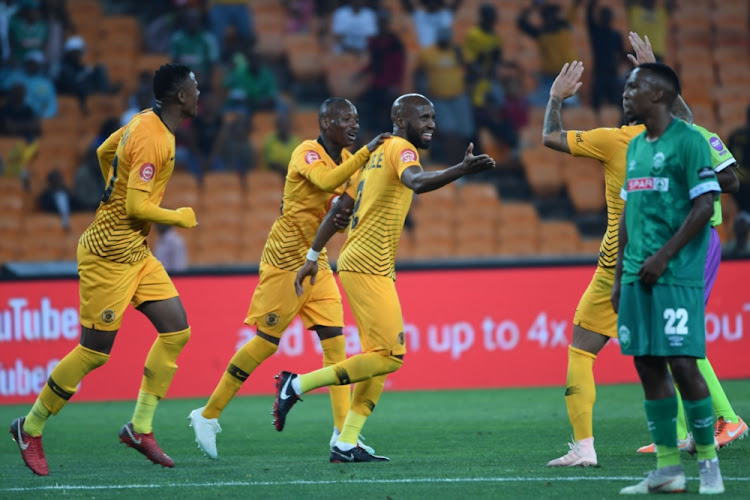 Amakhosi were worth more goals‚ especially in an opening hour in which they overwhelmed the Durban team with some considerably aesthetically pleasing attacking football that delighted the home fans.

Ramahlwe Mphahlele in the 43rd minute and Siyabonga Ngezana in the 58th were Chiefs’ scorers.

Solinas‚ he likes to attack. And right now‚ Chiefs are loving it.

The Italian also has got guts. After a nervy start‚ then getting his first win of the season with a memorable 4-1 thrashing of Cape Town City away last Saturday‚ most coaches would have consolidated and gone for another against soft‚ off-form Free State Stars at Goble Park on Wednesday night.

Solinas did‚ but with a near-B team who still managed an at times even stylish 2-0 victory.

Against AmaZulu‚ Solinas put out his attacking dream team that he had discussed with journalists at a Chiefs training session a few weeks ago‚ bar injured Leonardo Castro‚ replaced at centre-forward by Bernard Parker.

Coach Giovanni Solinas has warned the club’s Premier Soccer League rivals that the best of Kaizer Chiefs is still to come and believes the addition ...
Sport
3 years ago

Behind Parker‚ Solinas had Dumisani Zuma on the left wing‚ Khama Billiat at second striker and Lebogang Manyama on the right. Willard Katsande was the only defensive player in front of the back four‚ partnering Siphelele Ntshangase in central midfield.

Even the increasingly sprightly Godfrey Walusimbi at left-back was attacking.

AmaZulu‚ who had led 3-2 before holding champions Mamelodi Sundowns to 3-3 in a pound-for-pound draw in Umlazi on Sunday‚ were supposed to be a tough nut to crack.

But Chiefs had brought their nutcracker. They largely swept Usuthu aside with glee.

In this past week Solinas's tenure at Chiefs has undergone a complete turnaround after a bucket-load of goals (eight) in three successive PSL wins.

From beginning of three weeks’ preseason‚ then an MTN8 semifinal exit and no league win through August‚ where he was the butt of plenty of doubts and grumbles in the stands‚ the likable‚ adventurous Italian finds himself being loved for his football as much on the field as in the terraces.

Who knows if this is a fleeting affair or a potential long-term relationship. What seems increasingly certain is that the ride finding out is going to be as thrilling as any theme park rollercoaster.

Amakhosi showed the rousing movement they have been displaying under Solinas

Chiefs' attacking layout made for an entertaining first half‚ where the Soweto giants at times streamed forward in a manner that some might recall as having resembled African Wanderers in the 1990s‚ pinning Cavin Johnson's nuggety AmaZulu back.

Amakhosi showed the rousing movement they have been displaying under Solinas when‚ as early as the sixth minute‚ Walusimbi was put down the left and squared for Parker to connect wide.

Just after the half-hour Manyama's swerving free-kick was awkwardly pushed over by Moeneeb Josephs. Billiat's resultant corner saw a goalmouth scramble that ended with Daniel Cardoso rocking the crossbar.

Apart from a lone foray forward from Bonginkosi Ntuli‚ AmaZulu had been pressed deep in their own half.

Usuthu were backpedaling again conceding another corner from which Usuthu defender Mbongeni Gumede's challenge on Ngezana saw the ball spill a few metres to Mphahlele‚ who scooped in Chiefs' deserved opener.

Billiat might have had one of his quieter games in a Chiefs jersey‚ but the little playmaker's influence could not be subdued.

Thirteen minutes into the second half the Zimbabwean's free-kick from the left was perfectly directed onto the head of Ngezana‚ who neatly deflected in a third for Amakhosi with a training ground goal.

Giovanni Solinas must thank his lucky stars that Kaizer Motaung is not Chippa Mpengesi.
Sport
3 years ago

It might not have been a successful season, but Lebogang Manyama believes he learned a lot tactically in adversity in Turkey, and that he can bring ...
Sport
3 years ago