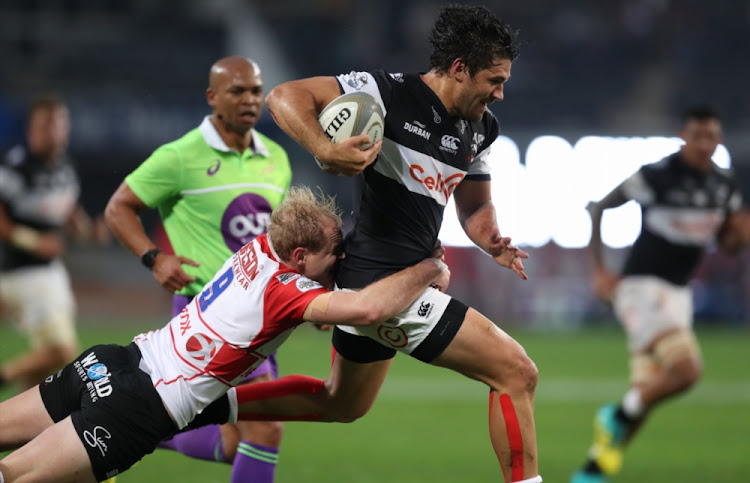 A smart first-half performance allowed the Sharks to ease past the Golden Lions 37-21 on Saturday at a wet King's Park.

It was the Sharks' fourth consecutive bonus point win in the Currie Cup this season and they remain unbeaten while the Golden Lions were consigned to a second straight defeat.

The way the first half ended was a stark contrast to how the game started. While the Sharks drew first blood through a third-minute Robert du Preez penalty‚ it was the Golden Lions who scored the first try through Sylvian Mahuza five minutes later.

The saturated conditions were never going to allow for fluid passing and Lions pivot Shaun Reynolds picked out Mahuza‚ operating on the right wing‚ with a pinpoint kick-pass.

The hosts were shocked into action and took full control of the game while Du Preez extended their lead with two penalties.

It was the Sharks' fourth consecutive bonus point win in the Currie Cup this season and remain unbeaten while the Golden Lions were consigned to a second straight defeat.

With the Sharks bossing the collisions‚ showing better enterprise with ball in hand and respect for the conditions‚ they scored their first try through No.8 Daniel du Preez in the 24th minute.

The twin‚ who had a superb game‚ started the try-scoring move from the base of the scrum and the Sharks recycled the ball well without dropping a phase.

While the grounding needed the television match official's intervention for Louis Schreuder's 34th minute try‚ there was no doubt as to the dominance of the Sharks in the buildup as the younger Du Preez again broke from the base of the scrum before he offloaded to his scrumhalf.

The Golden Lions' misery was compounded when lock Marvin Orie was needlessly yellow-carded for his hand making contact with Hyron Andrews's face.

The visitors paid for Orie's indiscretion when the Sharks muscled over for a try that was credited to livewire loose-forward Luke Stringer after the younger Du Preez nearly botched it from the back of the scrum.

A 30-7 half-time deficit was always going to be difficult to overturn and they were lucky not to concede an early second half try by Jeremy Ward.

In the buildup‚ Tyler Paul's pass was forward and the Lions had a lucky escape. The Sharks did score their fourth try in the 48th minute through the younger Du Preez.

The Lions had the better of the second half with tries by loose-forward James Venter and replacement back Wandisile Simelane in the 59th and 76th minutes but the Sharks had done the business in the first half.

As much as it had a hint of inevitability about it‚ Neville Jardine still required patience and perseverance before he was installed as the Golden ...
Sport
3 years ago

Aphelele Fassi on his rise at the Sharks

This seems to be the year of the outside back in South Africa and while the country is still crazy about Aphiwe Dyantyi‚ Aphelele Fassi has appeared ...
Sport
3 years ago

OPINION: Black rugby coaches still sit at the back of the coaches box

Equality‚ or lack thereof‚ remains in the spotlight in the National Football League (NFL) in the United States.
Sport
3 years ago