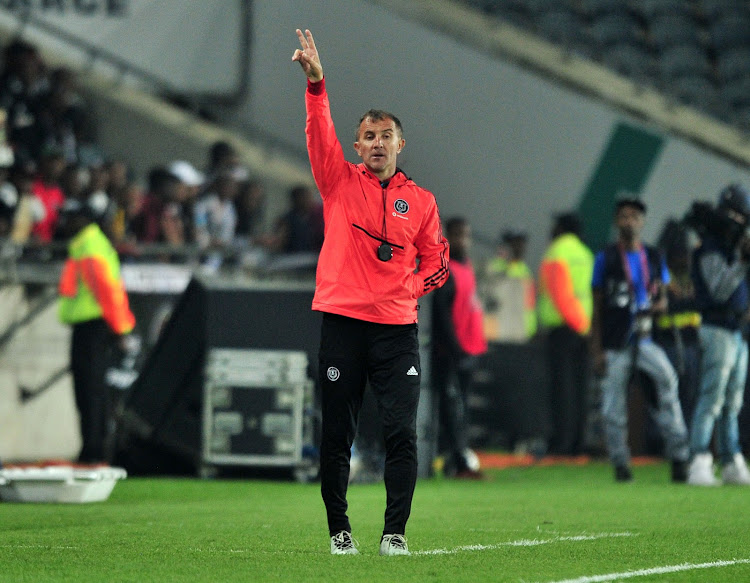 Orlando Pirates coach Milutin Sredojevic detected his team’s slow buildup as one of the main reasons why they could not penetrate Lamontville Golden Arrows in their lukewarm goalless draw at the Orlando Stadium on Wednesday night.

The point collected by Bucs – a third draw in five matches at home this season – saw Pirates miss out on a chance to move to the summit of the Absa Premiership as it left them one point behind‚ and one match ahead of‚ log leaders Bidvest Wits.

“We just didn’t have enough bite in the last third to trouble our opponents. The result has shown that we didn’t do enough‚” Sredojevic said.

“We created chances but not enough chances. What we created we couldn’t score from. From an attacking point of view‚ that’s needs to be corrected.”

Playing at home against a team who they usually dominate‚ it did not help Sredojevic that he started the match with lone striker in Augustine Mulenga when he had his Zambian counterpart Justin Shonga sitting on the bench.

Shonga did eventually come on in the second half but by that time it became hard to change the outcome of the match.

“I need to give the players credit for trying. We need to improve because it is not enough what we did‚ meaning we need to dig deeper‚” said Sredojevic.

Mulenga was derived of supply against a determined Arrows defence that denied space to Pirates’ wingers Thembinkosi Lorch and Vincent Pule.

Also missing in action was playmaker Xola Mlambo‚ who hardly delivered his usual penetrating passes to the forwards.

Sredojevic had Bucs’ outstanding player of last season‚ Musa Nyatama‚ on the bench but again he opted not to use him even though Mlambo and Ben Motshwari struggled to unlock Arrows in critical areas.

“We are not satisfied attacking-wise. We are disappointed but on the other side I need to give credit to Arrows‚ who came here with a much organised defence‚” said Sredojevic.

Trying to pinpoint what could have contributed to Bucs’ poor display‚ Sredojevic admitted that they were too slow in delivering the final passes that could have hurt Arrows.

“We need to have faster ball movement in our buildup from the middle. We need to find the key to have consistency going forward‚” he said.

What should give hope to Sredojevic is Pirates’ form away from home where they meet AmaZulu at King Zwelithini Stadium in Durban on Saturday.