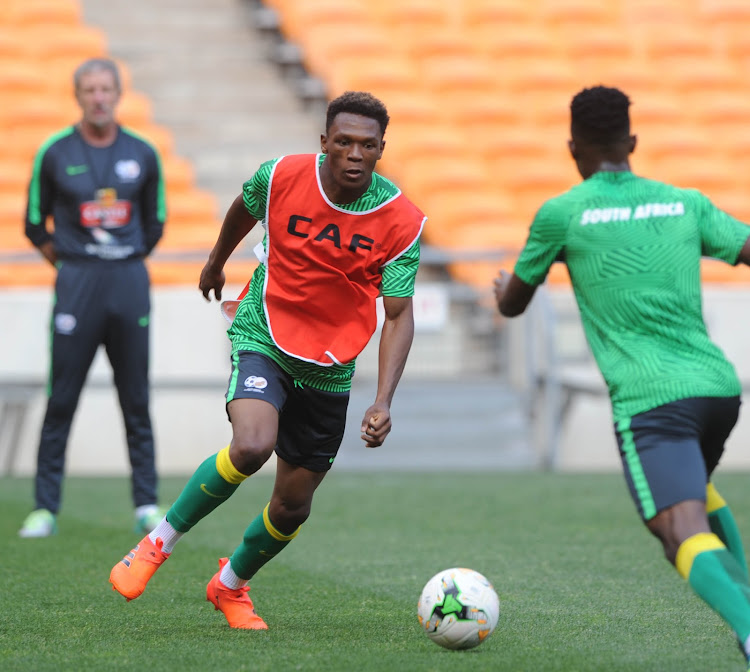 Lebogang Mothiba says he is back in South Africa to score goals for Bafana Bafana in their 2019 Africa Cup of Nations qualifier against Seychelles at FNB Stadium on Saturday.

The match presents a tasty opportunity for South Africans to finally get a first proper view of Mothiba‚ the Racing Strasbourg striker who is perhaps Bafana's hottest young property right now.

Previously Mothiba scored senior team goals against Angola and Zambia in a four nations cup won by Bafana in Zambia in March‚ but that friendly tournament was not televised in South Africa.

The monstrous‚ physically imposing centre-forward also did duty for the SA Under-23s at the 2016 Olympics in Brazil‚ though then was not had not enjoyed his Ligue 1 breakthrough.

He played a role as a bustling centre-forward‚ but did not have the confidence he's expected to display against Seychelles having set Ligue 1 alight at the start of this season with five goals - one for Lille then four more for Strasbourg after a R135-million transfer in late August.

"It's always good as a striker to score goals. You get confidence and the hunger also to score even more goals.

"But I'm here to do my best and help the national team.

"Of course‚ I'm a striker. My ambition for my first game for the national team is to score goals‚ and to help the team win games."

Mothiba said he's enjoyed working under the assistant-coach Bafana coach Stuart Baxter has roped in for the back-to-back matches against Seychelles (the second is on Victoria on Tuesday)‚ Shaun Bartlett‚ the former Charlton striker who is Bafana's all-time second-top scorer.

"Shaun Bartlett is a legend. He knows exactly what you need to do‚ how to finish as a striker‚" Mothiba said.

"So he's helping us a lot in the national team and I'm happy to have him here."

Apart from glimpses‚ Mothiba remains a close book to most South Africans having signed as an 18-year-old for Lille from Diambars Academy in Johannesburg‚ and never played in the Premier Soccer League.

"Me as a striker‚ I like playing actually even as part of two strikers up-front. I'm comfortable with it‚" he explained.

"But most of the time I'm always playing in one up-front‚ where I can keep the ball and lay it off for the midfielders."

Bafana are in second place on goal difference from leaders Libya in Group E‚ on four points‚ and can put themselves in the driving seast to qualify for Cameroon 2019 with wins against the Seychelles.