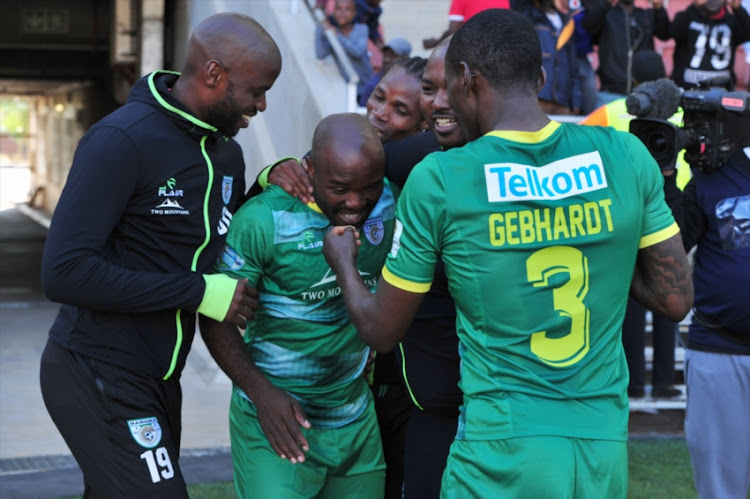 Mamelodi Sundowns defender Musa Lebusa had a nightmare of a game as his two crucial mistakes played a huge role in helping Baroka FC become the first team to qualify for the semi-finals of the Telkom Knockout on Saturday afternoon.

By booting out Sundowns, who came to Peter Mokaba Stadium in Polokwane as favourites, Baroka made history as it was the first time they made it to the last four of this competition.

Lebusa was first unlucky to have been punished for what didn’t completely look like a hand ball in the 21st min when Talent Chiwaphiwa’s headed cross bounced off his shoulder but judged as a penalty by referee Victor Gomez.

Baroka’s midfielder Mduduzi Mdantsane made no mistake from the spot kick, sending Sundowns’ gloveman Riyaard Pieterse the wrong way to give Bakgaga an early lead.

Just as Sundowns were trying to recover from the first blow and pushing for the equaliser in the second half, Baroka struck again in the 68th minute.

This time a harmless low cross by a substitute and right winger Matome Kgoetyane hit Lebusa’s legs and wrong footed goalkeeper Pieterse, who could only push it into his own net while trying to clear it.

Sundowns did have the lion share of possession in this whole match but what they lacked were the final passes to their main target man Tony Silva, who had Gaston Sirino, Lebohang Maboe and Themba Zwane offering attacking support behind him.

Sundowns started the second half on the front foot but even the introduction striker Jeremy Brockie for Silva in the 60th minute failed to yield a positive outcome for Pitso Mosimane’s side which failed for the third year in a row to make an impact in this competition.

Sundowns were also knocked out by Chippa United 1-0 in the first round of this competition last year.

The Brazilians last won the cup in 2015 when goals by Leonardo Castro, Thabo Nthethe and Hlompho Kekana helped them beat Kaizer Chiefs 3-1 to win it for the third in seven finals they have contested.

Baroka were always brave in this match, the Bakgaga players who had to play this match without their head coach Wedson Nyirenda who attended his mother’s funeral in Zambia, not afraid to take on their opponents.

Man-of-the-match Mdantshane said they needed this win as things are not going well for them in the league.

“We’ve been struggling with scoring but I guess it paid off today. We had even more chances to score more goals today,” said Mdantsane after match.

Stand-in-coach and assistant to Nyirenda, Matshimela Thoka hailed his team for their gallant efforts, saying they did well not to show respect to Sundowns.

“We are happy to be in the semi-final and from now anything is possible. We can go to the final.”