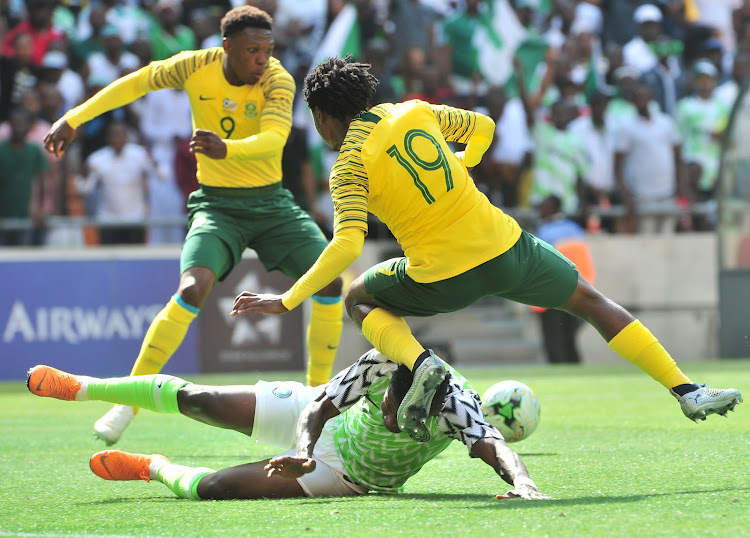 Percy Tau explained that it was in the spirit of teamwork that he elected to pass the ball to his striking partner Lebo Mothiba instead of scoring himself after creating an incredible chance in Bafana Bafana’s 2019 Africa Cup of Nations (Afcon) qualifier against Nigeria in Johannesburg a few days ago.

Tau left three Nigerian defenders bewildered on the edge of the penalty box in the 25th minute of the game but unselfishly chose to lay a pass to Mothiba to score his fourth goal in five Bafana matches.

“For me it was easy for Lebo to score and it’s important for us to be a team‚” said Tau.

“It’s always never important who scores but we just have to work as a team and Lebo was in a better position to score that one.”

Nigeria coach Gernot Rohr was so impressed that he suggested that Tau has no business earning a living in the Belgian second division and should be at a more glamorous European league.

Tau is on loan to Union SG from English Premier League side Brighton & Hove Albion.

“I think it was a difficult game but then we tried to work very hard and we wanted to win and we showed positive football‚” said Tau of their 1-1 draw against the Super Eagles.

“They scored early and we had to comeback and try get a win. But then it’s unfortunate that we got a draw.

“We just have to put our heads up and look forward because there’s still another match. I think we should have won the match.”

The former Mamelodi Sundowns striker said they were disappointed after failing to break down the Nigeria rearguard as they searched for the winner in the second half.

“I think them playing five players at the back it really tells you how cautious they were in the match because we beat them away (in Uyo).

“They had five defenders and two central midfielders that were in front of the five.

“So it was difficult for us to get into those pockets. We felt they were tired because of the heat.

“The right centre-back was injured‚ so we felt we could get behind them and score but it didn’t work out.”

While Nigeria qualified with the point gained in Johannesburg‚ Bafana still have it all to do away to Libya in March to qualify for the Afcon in Cameroon in June next year.