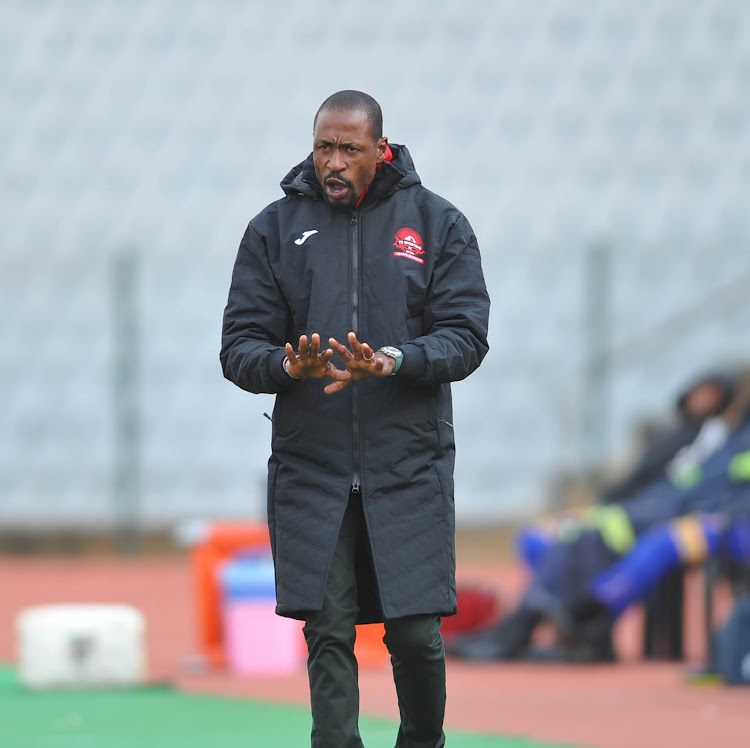 TS Sporting head coach Benson Mhlongo insists he is still employed by the club despite the appointment of a new coach on a caretaker role.
Image: Sydney Mahlangu/BackpagePix

Benson Mhlongo is adamant he is still the head coach of TS Sporting despite the National First Division (NFD) newcomers announcing that his assistant Mfanimbela Maseko has taken over in a caretaker role.

Sporting released a statement on Monday in which they revealed that the former Orlando Pirates assistant coach has not reported for duty since November 13 and has consequently been replaced by his second in command Maseko.

“I don’t know what you are talking about.

"It’s news to me and I’m not on social media so I could not have seen (news of Maseko’s appointment) it anywhere else‚” Mhlongo told TimesLIVE on Monday but refused to give more details.

“No one from the club has spoken to me today or yesterday so as far as I am concerned I’m still the coach.”

Asked whether he still considered himself as the Sporting head coach‚ Mhlongo said: “Yes as I’m speaking to you right now I am employed as a coach by Sporting.

"But at the moment I can’t say more. The only thing I can say is that let us give the club a space to give more clarity.”

The club said Mhlongo’s absence was triggered by the request made by the club to him to work closely with newly appointed technical director Sammy Troughton‚ who was appointed on November 5.

Through his manager‚ Mhlongo informed the club that he was taking a “sabbatical leave” to apparently attend to a family bereavement‚ but the coach has not been seen back at the club’s training grounds since November 13.

“His manager has informed us through an email that his client has taken a sabbatical leave. Till now we have not heard from him‚” reads a statement from Sporting.

"We must however indicate without any fear of self-contradiction that for now he still remains our trusted head coach until we hear from him or circumstances determines otherwise.

"The team will make a proper announcement as to what is to be the way forward in due course.”

Sporting added that Mhlongo has handed all the properties belonging to the club.

Sporting are sitting pretty on the NFD log table in third spot with 19 matches from 11 matches and are four points behind leaders Stellenbosch FC.

“His absence was a shock because it was unexpected and is something that we were not prepared for‚” adds the club’s statement.

Mhlongo was appointed at the beginning of the current season having served as assistant coach at Pirates in the previous season.

Sporting communications manager Stanley Madonsela did not respond to text messages sent to him at the time of publishing. Madonsela's phone rang unanswered.