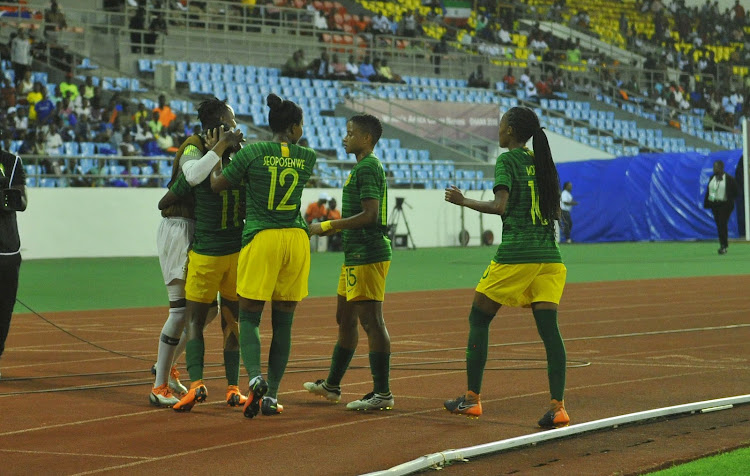 Banyana Banyana marched into the semifinals of the 2018 Africa Women's Cup of Nations (Awcon) with a 1-1 draw against Zambia in their final Group B match at Accra sports Stadium in the Ghanaian capital on Saturday night.

Banyana dominated and had chances for a third straight win of the group stages. They took their foot off the gas to some extent from their racing start to the Awcon of two straight wins.

But with a top of Group B finish, setting up a semifinal against Mali on Tuesday, this appears to be SA's best chance to convert three runners-up appearances into a long-awaited Nations Cup victory.

After their two outstanding opening results - beating 10-time winners Nigeria 1-0, then hammering twice-victors Equatorial Guinea 7-1 - Banyana needed to not lose by three goals against Zambia to be sure of progression to the semis.

A draw, though, could see the South Africans confirm top spot, meaning they could avoid Cameroon in the semis.

Nigeria hammered hapless Equatorial Guinea, who had also lost 5-0 against Zambia, 6-0 in Cape Coast to confirm second. They will meet Cameroon in Tuesday's Accra semifinal.

Banyana took the lead from an emphatic strike by Kgatlana.

Left-back Nothando Vilakazi's looping cross from deep found the Zambian defence completely out of shape, bounced, and fell to South Africa's centre-forward, who let rip with a half-volley into the top-right corner from 22 metres.

Within four minutes Banyana allowed Zambia to draw level. Defensive midfielder Mamello Makhabane's header in her own half was misdirected into the path of Mary Mwakapila, who was able to slip a pass through to Kundananji.

Just before the break Refiloe Jane connected a half-volley from near the spot from which Kgatlana scored, the winger's effort drifting wide.

In the second half an early Janine van Wyk free-kick curled from the left edge of the box did not have power, and was easily held by Zambia keeper Hazel Nali.

In the 66th substitute Jermaine Seopesenwe played Kgatlana down the right, who rounded Nali but rolled her attempted finish wide across the face of goal.