Benni McCarthy wary of SuperSport with Furman and Yeye back 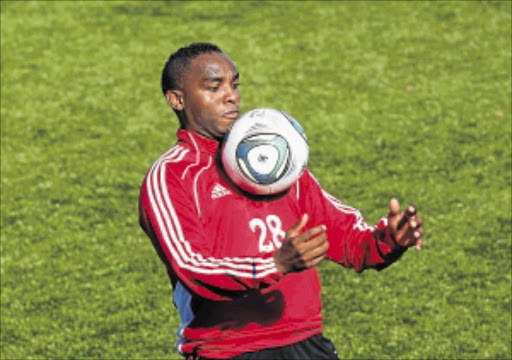 Benni McCarthy says there will be no secrets when his Cape Town City host SuperSport United in their Nedbank Cup last-32 clash on Saturday‚ a fourth meeting of the season between the two sides.

City won both league encounters‚ including a 1-0 away success earlier this month‚ while they also defeated Matsatsantsa on penalties in the final of the MTN8 in September.

Mccarthy admitted that with the return of Dean Furman and Bradley Grobler from injury it will be a different SuperSport to the one they faced in the league a few weeks ago‚ but has a plan to counter their threat.

“Last season it was [Bidvest] Wits that we met four times in a season‚ this year it’s SuperSport‚” McCarthy said.

“But we take what we get and try to prepare well and go out there and do what we are suppose do‚ which is to give 150 percent.

“The best team will advance‚ but I’m sure if my team gives 150 percent it will be pretty tough [for SuperSport]. I have full confidence in my team.”

McCarthy was impressed with the way SuperSport played in their 2-1 victory over Bloemfontein Celtic last time out and says their returning players have made a difference.

“The way they played last week was a fantastic win against Celtic. They are solid‚ SuperSport is a very physical side. Their talisman‚ Dean Furman‚ is back in the side‚ he is a very solid‚ born leader.

“Yeye [Reneilwe Letsholonyane] is back – he never looks like he is getting older on the pitch. He is full of energy‚ classy on the ball‚ he does all the right things.

“The young boy [Teboho] Mokoena‚ I rate him very highly‚ I think he’s a sensational player. If you let him lose and let him play the game he has a lot of good things in his game at such a tender age.

“With that three in the midfield it is always difficult to maintain control of the game. [there’s] the bonus of getting [Bradley] Grobler back as well. They’ve got some big hitters coming back.”

City have a few injury worries and while defender Edmilson and winger Surprise Ralani have resumed training‚ McCarthy says they are unlikely to get a run from the start.

“Edmilson‚ it’s only his third day back. Surprise‚ it is his first day back today. Both have been out from the last SuperSport game.

“It’s nice to have the players back‚ but it’s maybe a few training sessions too late [for those players]. It is not fair on the other guys‚ so I don’t think I’m going to take that risk‚ or that I am that desperate‚ that I will throw them in straight away.

“I have got confidence in every player in the team. I trust them enough to know that whatever side I put out there‚ they will go and do a job for the team and work hard.”

McCarthy revealed he will be without his usual midfield anchors‚ Thabo Nodada and Roland Putsche‚ but said he has ample experience to cover for the missing duo.

“Maybe he doesn’t have the legs any more where he bombs box-to-box‚ but he still has the intelligence.

“He can still compete for another couple of seasons. He has proven it over and over this season‚ every time he is on the pitch he stands out because he has that quality.

“We maybe lose a little bit of the mobility that we have with Thato and Roland‚ the high-pressing game that we like to play‚ but I have still got a lot of footballers on the pitch. We are a strong footballing team.”