Banyana go down to North Korea at Cyprus Cup 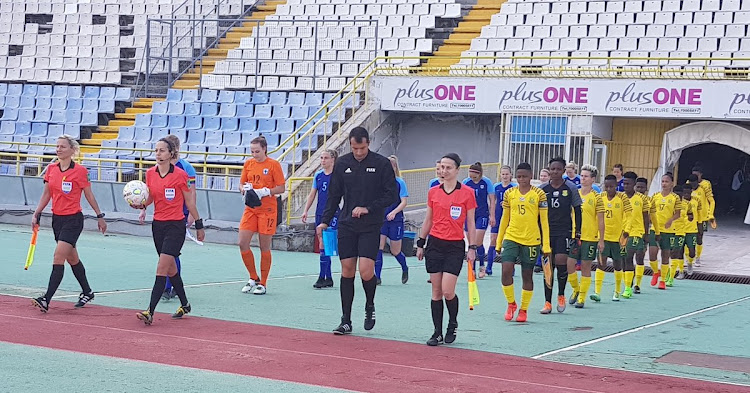 Banyana Banyana’s preparations for the FIFA Women’s World Cup took a dent when they were beaten 4-1 by North Korea at the Cyprus Cup on Friday.

The Koreans are a formidable outfit ranked number 11 in the world and easily picked South Africa apart in the first half as they led 4-0 at the break.

Lebohang Ramalepe reduced the deficit early in the second period, but there will be much for coach Des Ellis to ponder as her near full-strength side crumbled in a performance that fell well short of their recent high standards.

Ellis made six changes from the side that drew 2-2 with Finland in their opener on Wednesday, restoring Thembi Kgatlana and Linda Motlhalo to the starting line-up, along with Kaylin Swart, Bambanani Mbane, Mamello Makhabane and Nompumelelo Nyandeni.

But hesitant defending inside the opening seven minutes allowed Yun-Mi Kim to open the scoring for the Koreans.

A feature of the Banyana Banyana performances of late has been a slow start in matches and the curse struck again as they fell 2-0 down six minutes later as Ri Hyang-Sim grabbed a second for the Asian side.

A fast counter-attack from North Korea led to their third before the half-hour mark as Kim finished off a sweeping move, and it was 4-0 soon afterwards when Hyang-Sim bagged her second.

Kholosa Biyana and Jermaine Seoposenwe were introduced in the second half and soon after the break Banyana got on the scoresheet as Ramalepe netted with a fine strike.

Banyana showed more application in the second period and were good value for more goals, with substitute Amanda Mthandi having the best chance late on when she fired wide with just the goalkeeper to beat.

Banyana will play their final pool match on Monday against the Czech Republic, after which they will have a final play-off game to decide their final position in the tournament.

The Czechs beat Finland 2-1 in the other match in the pool on Friday to leave Banyana bottom.

Ellis is using the Cyprus Cup as preparation for the World Cup in France in June, where Banyana have been drawn with Germany, China and Spain in Group B.