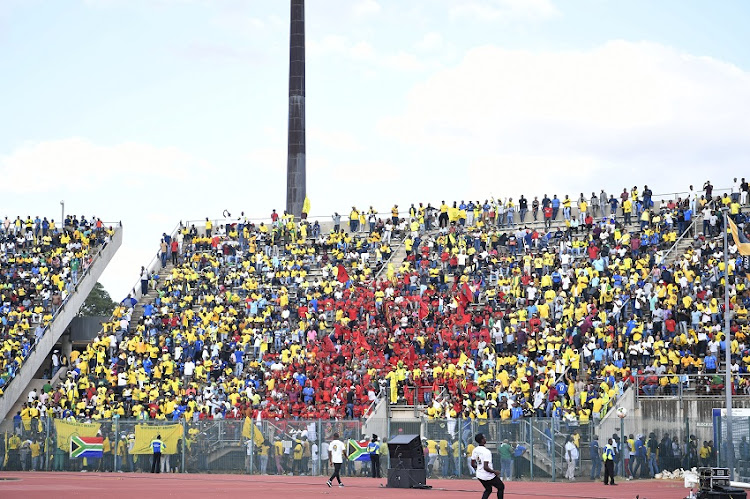 Political parties are headed for a possible collision course with the Premier Soccer League (PSL) over the use of football stadiums to campaign for the upcoming general elections on May 8.

Economic Freedom Fighters (EFF) supporters were seen in their full regalia and displaying banners during last week’s crunch PSL clash between Orlando Pirates and Mamelodi Sundowns at Orlando Stadium‚ which ended in a 0-0 draw.

Even though it was not a PSL game‚ EFF supporters were at it again on Saturday during the Caf Champions League match between Sundowns and Al Ahly at Lucas Moripe Stadium‚ where the Brazilians convincingly thrashed the Egyptian giants 5-0 in the quarterfinal‚ first leg.

In the same game in Pretoria‚ African National Congress (ANC) supporters were seen distributing t-shirts outside the stadium and the trend is likely to continue with PSL matches in the coming weeks as the elections draw closer.

PSL spokesperson Lux September has asked political parties to refrain from using their platforms for political or religious purposes in future.

Mxm these political parties coming to our Football matches and in their political party gear doing nothing but ruining everything & and creating fractions in the stadium. Everyone was dressed in Yellow youre out here wearing the same color as our opponents? Okay cool.

“Football‚ as you know‚ is apolitical. It remains a safe space for people from different backgrounds‚ be it religious‚ race or political. We therefore do not condone anyone who uses this platform for political or religious purposes‚” September told TimesLIVE on Monday afternoon.

“The only thing that should divide people at stadiums is club affiliation‚ nothing else‚ and we hope that going forward we will cooperate with all parties.”

Sundowns spokesperson Alex Shakoane said that supporting the defending PSL champions is for everybody‚ regardless of political or religious persuasion.

After the comprehensive 5-0 demolition of Al Ahly in the first leg of the Caf Champions League quarter-final on Saturday‚ humble Mamelodi Sundonwns ...
Sport
3 years ago

“Mamelodi Sundowns has got supporters‚ members and stakeholders who come from different backgrounds‚ communities and constituencies and who belong to all the different political parties‚ trade union organisations and other constituencies throughout South Africa‚” said Shakoane.

“Mamelodi Sundowns has a duty and is committed to ensuring that all our supporters‚ members and stakeholders are treated equally at all times and that no individual‚ group or organisation is preferred or advantaged in any way whatsoever‚” he added.