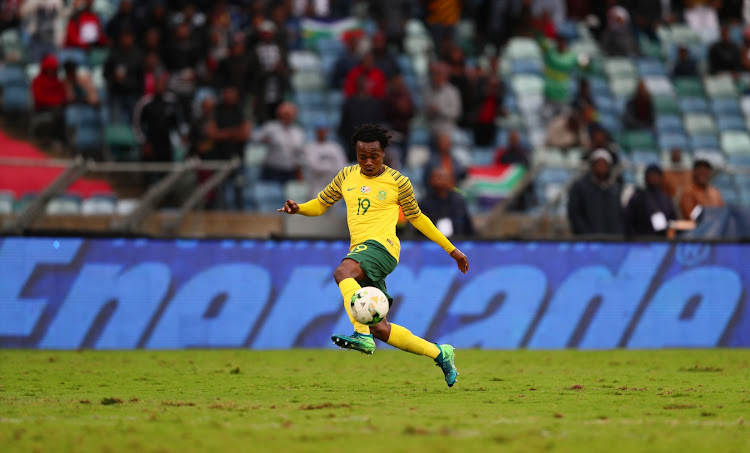 Percy Tau is set to play a significant role for Bafana Bafana at the African Nations Cup in June and coach Stuart Baxter wants his star man to “stretch himself even more” in the Egypt tournament.

Bafana were pitted against Ivory Coast‚ Namibia and Morocco in Group D after the draw in Cairo a few days ago and Baxter said he wants Tau to win big games for the national side in the event.

“Big players win big games and you can’t prepare people by wrapping them in cotton wool‚” said Baxter of his most prized asset Tau‚ who scored four goals to help secure Bafana's 10th appearance in the event.

“The easy way is not a good teacher.

"Percy has got to where he is by working hard and taking some of the knocks."

Baxter said Tau would demonstrate the rapid strides he's made in the year he’s spent while on loan with Belgian second division side Royal Union Saint-Gilloise following his transfer from Mamelodi Sundowns to English club Brighton & Hove Albion in July last year.

"When Chris Hutton (Albion coach) called and asked me ‘is he strong enough’ I said to him he played against (Kalidou) Coulibaly (of Napoli and Burkina Faso) and didn’t get knocked around‚" .

“I said if you look at the Burkina Faso centre-backs they are almost two metres and 150 kilos‚ yet Percy was in and out of them and they couldn’t catch him.

“He had to go through that and Coulibaly did try and knock him out. The two centre-backs did. So he got through that. I think he needs to stretch himself even more.

“So rather than wrap Percy under the cotton wool and say that we don’t want them to target him‚ well target him.

“So we have to get better as a team and Percy has to stretch himself.

"In the time leading up to the Afcon we will take that into account with all the players.”

Percy Tau is being wrapped in cotton wool by his Belgian club Royal Union Saint-Gilloise‚ who have now left him out of their last two games because ...
Sport
3 years ago

Tau scored two wonderful goals in the second half when Bafana beat Libya 2-1 in an intense game in Tunisia last month.

Bafana needed a point to qualify and Tau helped the team to get an emphatic victory that saw Baxter’s team finish unbeaten with 12 points‚ one shy of Nigeria who topped their group.

The other two goals for Tau came in Bafana's first competitive win against Nigeria when they defeated the Super Eagles 2-0 in Uyo in June 2017.

He scored the other in the 6-0 demolition of Seychelles at the FNB Stadium late last year.