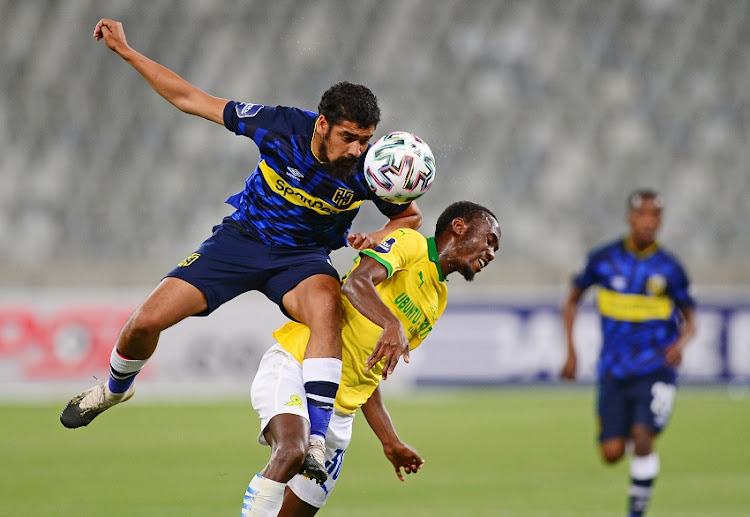 The away win was secured through goals in either half by Lyle Lakay and Keletso Makgalwa and sees the Brazilians go top of the log on goal difference with seven points from two wins and one draw.

To their credit, the Brazilians are also yet to concede after three league matches while they have managed to score five goals.

For City, who were up against former players in the form of scorer Lakay and Kermit Erasmus, this was their first defeat of the season and they have dropped from fifth place to tenth on the standings with four points.

For City, who were up against former players in the form of scorer Lakay and Kermit Erasmus, this was their first defeat of the season and they have dropped from fifth place to tenth on the standings with four points.

The Sundowns coaching trio of Manqoba Mngqithi, Rulani Mokwena and Steve Komphela made only one change to the team that drew with Tshakhuma Tsha Madzivhandila (TTM) in their last league match last week.

The 35-year-old inspirational captain Hlompho Kekana, whose workload is being managed with the Caf Champions League in mind, was replaced by striker Erasmus in the starting line-up.

Sundowns took the lead after nine minutes when Lakay unleashed a powerful shot that gave City goalkeeper Peter Leeuwenburgh no chance from a well-constructed set-piece.

Sundowns striker Peter Shalulile was brought down on the edge of the box by debutant Terrence Mashego and from the resultant free-kick Lakay struck a low shot past the City wall after he was set-up by Rivaldo Coetzee.

Sundowns could have increased their lead after nineteen minutes through Andile Jali but his shot, which deflected off the body of City captain Thamsanqa Mkhize, was easily saved by Leeuwenburgh.

City also had their moments on the attack through the likes of Bradley Ralani, Fagrie Lakay and Thabo Nodada but they could not breach the Sundowns central defence of Ricardo Nascimento and Motjeka Madisha.

Leeuwenburgh, who was certainly the busier of the two goalkeepers for most of the game, was again called into action just after the half-hour mark by Erasmus but he was equal to the task.

Sundowns put the match beyond doubt eight minutes from time when Jali found unmarked and substitute attacker Keletso Makgalwa in the box who calmly put the ball into an empty net.

Jali did not celebrate the goal after he was stretchered off the field with what looked like a hamstring injury he suffered before he delivered the pass to Makgalwa, who ensured all three points.

On the stroke of full-time, City missed out on an opportunity to pull one back as Mpho Makola’s free-kick could only manage the crossbar with Sundowns goalkeeper Denis Onyango beaten.

With the MTN8 semifinal and the Fifa window over the next two weeks, both teams will only return to action in two week’s time with Sundowns hosting AmaZulu and City hosting Bloemfontein Celtic on November 22.