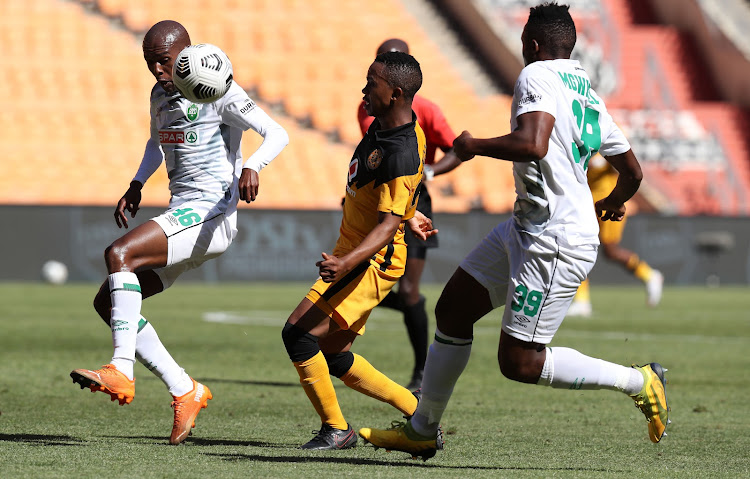 AmaZulu return home a satisfied team with four points in the bag from their two-match trip to Gauteng where they held unbeaten Swallows FC to a goalless draw in Dobsonville before this victory over Kaizer Chiefs at FNB Stadium.
Image: Muzi Ntombela/BackPagePix/Gallo Images

Kaizer Chiefs are just out of ideas, 10-man Amakhosi slumping to a 2-1 DStv Premiership defeat at FNB Stadium on Wednesday to a more alert, inventive and motivated AmaZulu.

A run of five unbeaten matches, including an initial three wins in a row, hinted at Gavin Hunt’s Chiefs finally discovering a modicum of form after a dismal start to 2020-21, but they had only flattered to deceive.

The two successive draws in that run have been followed by three defeats, meaning Amakhosi have played their last five matches without a win, Hunt still desperately seeking answers for his transfer ban-affected team.

Chiefs had Darrel Matsheke sent off by referee Jelly Chavani for a second bookable offence in the 72nd. Substitute Lehlohonolo Majoro finished from a corner for AmaZulu’s winner in the 85th.

Benni McCarthy’s organised, energetic Usuthu hit the woodwork twice, and their goalkeeper, Veli Mothwa, was easily the less active of the two glovemen. Itumeleng Khune, given a start by Hunt ahead of incumbent Daniel Akpeyi in Amakhosi’s goal, dealt well with a busy afternoon until his error led to Majoro’s winner.

Chiefs would have been disappointed on their home turf — nice and dry in sunshine after weeks of highveld rain — that it was AmaZulu cautiously probing openings in the first half, and who finally took the lead seconds before the break.

Amakhosi suffered an early setback when Lebogang Manyama had to replace injured Happy Mashiane in just the 16th minute. The opening half only got worse for the home team, who lacked spark in their movement to trouble AmaZulu.

The Durban team managed the shots on goal, Luvuyo Memela volleying into the arms of Khune and Mulenga’s powerful drive thudding on to the crossbar.

A weak challenge from Reeve Frosler on Mulenga saw the ball spurt to Mthembu to advance in the middle and feed Siphelele Magubane. The winger’s attempt at a rolled finish beat Khune, off his line, and was cleared off the line by Erick Mathoho, but as far as Mulenga, who controlled with his first touch and smacked the second into an exposed goal.

It took until just past the hour for Chiefs’ first real chance, and Mothwa finally having to make a save, getting down to Samir Nurkovic’s header from Frosler’s cross.

It was the threat of Nurkovic that earned Chiefs’ penalty, the Serb tugged down in the box by Tapelo Xoki. Leonardo Castro, on minutes earlier for Manyama, struck to the right of Mothwa.

Still, Usuthu were able to open Chiefs with relative ease, Mulenga beating Matsheke in midfield to allow substitute Xola Mlambo to lay off to Magubane, who struck the bar.

Matsheke was adjudged to have fouled Mulenga in that movement, and received his second yellow card from Chavani.

AmaZulu deserved more than a draw. Khune came for Mulenga’s corner and could not properly connect a punch, the ball looping to Majoro, who spooned a finish over the heads of Amakhosi’s defenders on the line.

Mamelodi Sundowns and Stellenbosch escaped punishment on Monday after they were found not guilty by the Premier Soccer League's disciplinary ...
Sport
11 months ago

AmaZulu's attacking midfielder Siphelele Magubane has every reason to believe Usuthu are capable of causing another upset and defeat Kaizer Chiefs in ...
Sport
11 months ago

The CAF Champions League clash between Morocco’s Wydad Casablanca and Kaizer Chiefs remains in limbo after the Egyptian FA on Wednesday rejected the ...
Sport
11 months ago