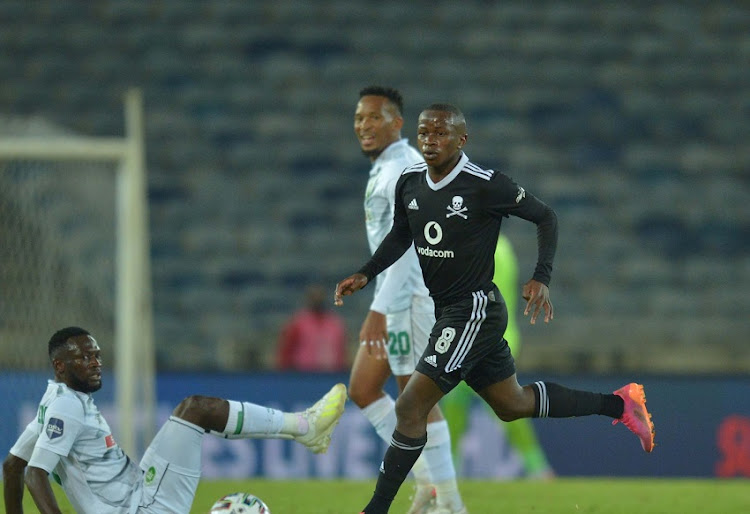 The Buccaneers marked their return to league football with maximum points at home. Gabadinho Mhango’s second-half goal was the difference between the two sides.
Image: TWITTER/ORLANDO PIRATES

Orlando Pirates brought themselves back into the equation for second place in the DStv Premiership, gritting out a 1-0 win at Orlando Stadium on Thursday night that inflicted a second defeat in succession on AmaZulu.

AmaZulu (50 points from 28 games) remain in second spot and pole position for the runners-up spot left to fight for in a league race where Mamelodi Sundowns wrapped up a fourth successive title with Wednesday’s 3-1 win against SuperSport United.

Bucs (46 points from 27 matches) brought themselves to within four points of Benni McCarthy’s Durban team, who have shown signs of a speed wobble suffering a second defeat to follow a 1-0 loss at home to Baroka FC. Before that AmaZulu had gone 16 league games unbeaten.

And Pirates have three matches left, to Usuthu’s two. Bucs also drew level on points with third-placed Lamontville Golden Arrows, who also have a game in hand.  Only goal difference is keeping the Soweto giants in fourth place.

The second-placed finishers qualify for the Caf Champions League, and third-placed for the Confederation Cup.

Orlando Pirates coach Josef Zinnbauer says it remains possible for his team to secure a second-placed finish in the DStv Premiership‚ but said to do ...
Sport
2 months ago

The notable aspect of Josef Zinnbauer’s Pirates XI was the league return, three months after limping off in a 1-1 away draw against SuperSport United on February 24, of Thembinkosi Lorch on the right wing.

Lorch had made his comeback starting in Bucs’ 4-0 humbling at the hands of Raja Casablanca in Morocco on Sunday in the second leg of their Confed quarterfinal, where Pirates exited 5-1 on aggregate.

Benni McCarthy had one of his star attackers this season, Luvuyo Memela, on AmaZulu’s bench.

Usuthu suffered a setback when Makhehlene Makhaula — nominated for Premiership Midfielder of the Season this week — went off with a groin injury in the seventh minute, replaced by Butholezwe Ncube.

Pirates made the early running, and pressed for an opener in a first half where neither team found their shape or rhythm convincingly.

In the best chance of the half, from a corner Nkanyiso Zungu’s header was headed in front of Usuthu goalkeeper Veli Mothwa by defender Thembela Sikhakhane into the path of Mhango, who blasted over when he should have hit the target.

All the half-chances came in the opening 20 minutes, in an opening half that became increasingly disjointed towards the break.

Zinnbauer introduced Vincent Pule for Hotto back from the changerooms.

Within three minutes, from a throw-in Lorch had the ball on the front edge of the area and touched to Pule, who skipped past centreback Tapelo Xoki and forced a save from Mothwa.

Pirates coach Zinnbauer on calls for his head: 'It’s totally normal — I can understand the supporters'

Orlando Pirates coach Josef Zinnbauer has responded to a planned march to call for his head saying he hopes there are enough Bucs supporters seeing ...
Sport
2 months ago

Usuthu were unfortunate when the ex-Pirates duo of Thabo Qalinge, with the cross, and Majoro, with a bullet header, were denied by the top left corner of the post. A stray pass from substitute Abel Mabaso allowed Memela, on for Sphesihle Maduna in the 64th, to curl a strike moments later that had Siyabonga Mpontshane at full stretch.

Mhango, after earning the free-kick with a run through the middle that forced a foul from Ncube, bent the set-piece superbly past Mothwa into the top-left corner.

Mpontshane hung on to Sithebe’s powerful drive near the end.