Baxter on Chiefs' two Ngcobos: 'If I was a fan I would be asking the same questions' 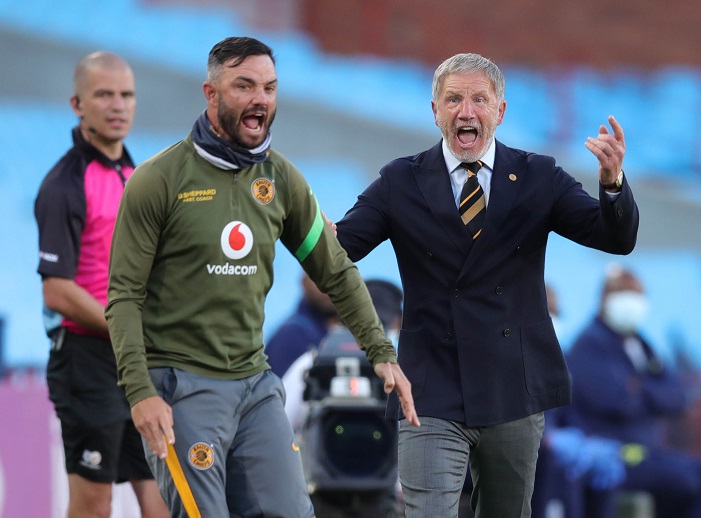 Kaizer Chiefs coach Stuart Baxter was grilled with tough questions in a press conference on Thursday, and his responses on Njabulo Ngcobo and Nkosingiphile Ngcobo's absences seem likely to leave the club's supporters only partly satisfied.

Given a reasonable start to his second tenure with a new-look team in a rebuilding phase, Baxter seemed surprised at so many question marks raised in the digital briefing ahead of his side's fourth DStv Premiership matchup of 2021-22 against Royal AM at FNB Stadium on Saturday.

After a flat draw against TS Galaxy, and at times sumptuous 2-1 win against Baroka FC, Chiefs missed chances and put up a fight in a 2-0 defeat to champions Mamelodi Sundowns at Loftus Versfeld on Sunday.

But the spotlight is always glaring at the country's biggest-supported club.

The already much-debated absence, apart from a substitute's appearance for emerging talent Nkosingiphile, of Chiefs' two Ngcobos this campaign was worsened by Thabani Dube starting against Downs and committing costly errors.

Njabulo Ngcobo's continued wait for a debut has been a talking point, given Daniel Cardoso and Erick Mathoho continue to be shaky at centreback, and Chiefs' 27-year-old signing was the Premiership's defender of the season at Swallows FC last season.

“The fundamental reason has been I have never seen him before,” Baxter explained.

“You talk about last season — I didn't see him one minute last season. So the first time I saw him was when I walked through the gates at Naturena.

“Njabulo was obviously going to have to make himself known to me, me to him, do some work together and see how quickly we can get him in.

“He's done very well in training, as has Austin [Dube], and at the moment it's been very much just trying to ease them in.

“If you throw them in at the deep end you may break their chances of establishing themselves.

“And I'm sure that Njabulo will appreciate that, and that when he gets his chance it'll be going in knowing what to do and give a good performance instead of being thrown into a backline that he's not familiar with, and he's not had practice with apart from a few training sessions.”

Baxter's answer left the question mark of why then throw in Dube against Downs, who played in the GladAfrica Championship last campaign?

It was put to Baxter that such questions, and others such as Nkosingphile Ngcobo seemingly being relegated to the bench on the back of Amakhosi's preseason signing spree, have been swirling among Chiefs fans, whose opinions cannot be discounted as they know their team well.

“Listen, if I was a fan those would be the questions I was asking the coach,” Baxter said.

“All I can say is that 'Mshini' [Nkosingiphile Ngcobo] has been doing really well the last two weeks. He went through a little period of being a bit flat. And then even if you are a talented lad that doesn't get you a place in the team.

“Now he's really starting to fire and putting pressure on the payers who are ahead of him.

“In terms of the centrebacks, for that game [against Sundowns], we needed a left-sided centreback, simple as that. If we'd needed the central one or wide on the right, I would have played Njabulo.

“But I think Austin for that game was the more natural choice. At the point where we can shuffle the pack and bring in Njabulo, I'm really looking to give him a run.

“And again I don't want to just throw him in where it's a new backline and they don't know each other. I want to throw him in when he's got a good idea of his job and the backline is settled.”

Baxter added at the end of the conference: "[Ngcobo] doesn't get more game time when more players arrive at the club. Happy [Mashiane] is the same. These are two talented players that I want to get into the mix, but more players come in and more doors close.”

Stuart Baxter's selections have come under scrutiny in recent weeks and the Kaizer Chiefs coach has found himself having to explain the absence of ...
Sport
11 months ago

Stuart Baxter surveyed the wreckage of Kaizer Chiefs' league defeat to Mamelodi Sundowns at the weekend and admitted the penalty miss by Lebogang ...
Sport
11 months ago

Peter Shalulile's value to Mamelodi Sundowns continues to rise exponentially and he once again showed why he's become such an important figure to the ...
Sport
11 months ago

Off-the-field tension on the Mamelodi Sundowns bench dominated the build up to their high-profile league showdown against Kaizer Chiefs, but the ...
Sport
11 months ago