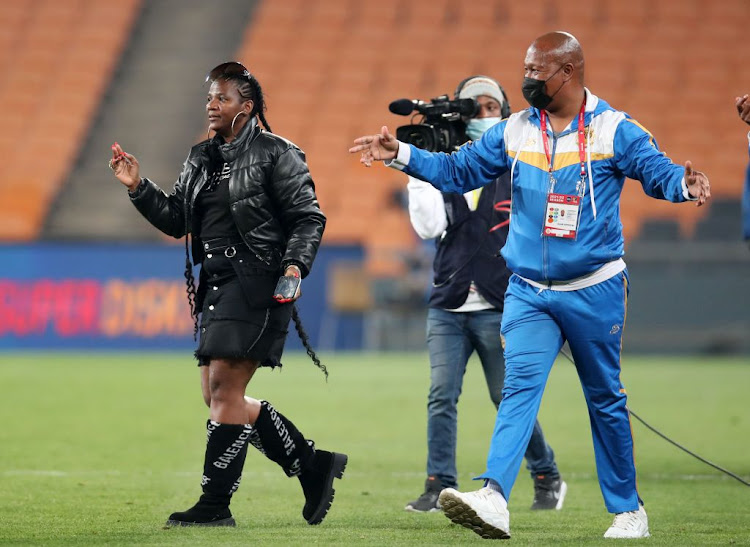 As Kaizer Chiefs' humiliation at the hand of Royal AM in their own FNB Stadium backyard continues to reverberate through SA football, the newcomers' owner revelled in the spotlight in typical outlandish fashion at the weekend.

It was to be expected that flamboyant businesswoman Shauwn Mkhize would not hold back after Royal handed Chiefs an embarrassing 4-1 league defeat on Saturday evening, and she did it in fine style.

Mkhize has attended all of the club's matches in the new season and while she put on a show in the stands as she danced to tunes belting out from the now ever-present  Bluetooth speakers, her players merciless dragged a dazed, bamboozled and befuddled Chiefs the entire length of the 2010 World Cup venue like a rag doll for long periods.

It was an evening to remember for the KwaZulu-Natal visitors and they were well on their way when Victor Letsoalo struck his first goal in the 34th minute. He returned with the second in the 66th minute, putting an already scrambling Chiefs permanently on the back foot.

The home side appeared to have been handed an undeserved  lifeline when Sifiso Hlanti's deflected free-kick snuck into the back of the net in the 74th minute.

But the flicker of hope proved to be short-lived as Chiefs substitute Sibusio Mabiliso turned the ball into his own net in the 76th minute. The home side were pretty much punch drunk at that point and it was left up to substitute Mfundo Thikazi to put them out of their misery with a fourth strike of the evening in the 95th.

Chiefs fans have been gasping for air since the final whistle and some incensed supporters are demanding that coach Stuart Baxter, who was hailed as a Messiah when he rejoined the club a few weeks ago, be shown the door with immediate effect.

Mkhize will be pleased by the way things are going as Royal AM, which is an amalgamation of Bloemfontein Celtic and the Royal team that played in the GladAfrica Championship last season, began life in the top-flight of the Premier Soccer League only in August.

The club earned their place after Mkhize succeeded in purchasing the status of Celtic, and she also managed to sell Royal's first-division status to Tshakhuma Tsha Madzivhandila owner Lawrence Mulaudzi in the same week.

Her club's shock thumping of Baxter's charges comes just days after she said Royal was not in the premiership to compete with the likes of Chiefs, Mamelodi Sundowns and Orlando Pirates.

She said there was no added “pressure” for her side to signal their intentions in the elite league as they are still building Royal into a competitive top-flight combination.

Mkhize, popularly known by her nickname MaMkhize, told Power 98.7 she had a three-year plan in the PSL and the main objective was to “unearth talent” in KwaZulu-Natal.

She insisted that her side know they cannot challenge big three clubs Chiefs, Sundowns and Pirates in the PSL in their first season.

But based on the effortless humbling of Chiefs in their own backyard on Saturday night, many observers and fans will argue that they can at least challenge the fast-fading Amakhosi.

Royal AM bury Kaizer Chiefs in a fine four-goal avalanche

What seemed a bright start for Stuart Baxter's second era at Kaizer Chiefs has quickly deviated into the territory of loose and muddy, as fired-up ...
Sport
7 months ago

KwaZulu-Natal businesswoman and Royal AM owner Shauwn Mkhize says her football club is not in the DStv Premier League to compete with the likes of ...
Sport
7 months ago

Royal AM owner Shauwn Mkhize has been charged with bringing the Premier Soccer League (PSL) into disrepute for making alleged racist and sexist ...
Sport
8 months ago