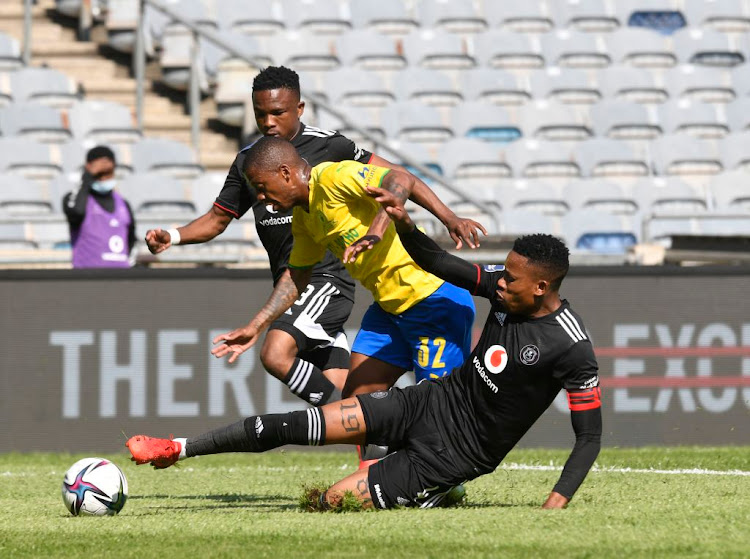 Peter Shalulile provided the sharp end to a 2-0 dismantling of Orlando Pirates on Saturday, but the direct running of Thabiso Kutumela and saves of Denis Onyango were as influential, Mamelodi Sundowns coach Manqoba Mngqithi said.

Sundowns dispatched Pirates so efficiently in their DStv Premiership clash at Orlando Stadium that the early signs in 2021-22 are that the record four-time successive champions are odds-on favourites for a fifth title.

Mngqithi said Kutumela forced his way into the starting line-up in the front-line ahead of Gaston Sirino based on his strong substitute’s performance and goal in the previous game, Downs' 3-0 home win against TS Galaxy.

Sundowns' coaching trio wanted Kutumela's directness and ability to get behind a defence to trouble Pirates, and it did, including when he beat Goodman Mosele on the right to provide the cross for Shalulile's 54th-minute opener.

“In the first half we made a lot of mistakes in not finding the double-run pass behind their centrebacks.

“We were looking for those possibilities and it was interesting that in the second half we managed to get a goal from that, with Peter’s second.

“Credit should also go to Kutumela [for the first goal] for being direct against Goodman Mosele, because he knows he's quicker than him. It was a push from the coaches for him to get behind the defence, and Peter was in the right place at the right time [to finish].

“But I want to give credit to [Pirates’ coaches] Mandla Ncikazi and Fadlu Davids. Pirates' organisation was very good. It was maybe not as easy as in the previous matches when we came here.”

Sundowns have won four of their five opening league matches, drawing their second game away against Chippa United (0-0).

“We always wish to have a start like this. Last season we also got 13 points in this cycle,” Mngqithi said.

“But we know the rainy days are coming. In the second round, and when the Champions League is there, the games are packed back-to-back and it's going to be difficult.

“And also one must also give a bit of credit to Denis - maybe that's why he is Africa's No 1. Because he also kept us in the game.

“He made some sterling saves, and those now make it look like we had the game in our hands. But the truth is that if he did not make those saves the game could have gone differently.

“Well done to him. And well done to the coaching staff for the profiling and analysis, to make sure that we profile the opposition to give the detail that is necessary for the match to the players.

“And when results like this come you must not be arrogant. You must keep going and dig deeper to make sure that you sustain these performances.”

Sundowns have a week to their next match against Swallows FC at Loftus Versfeld on Sunday.

Peter Shalulile had two clearcut chances, and the deadly Namibian scored from both as Mamelodi Sundowns put in a tactical, workmanlike shift to ...
Sport
2 months ago

Ronaldo could play even at the age of 40, says Solskjaer

Manchester United forward Cristiano Ronaldo is performing to the best of his abilities and could continue playing at the top level even at the age of ...
Sport
2 months ago

Pep Guardiola's Manchester City put one over Chelsea at last