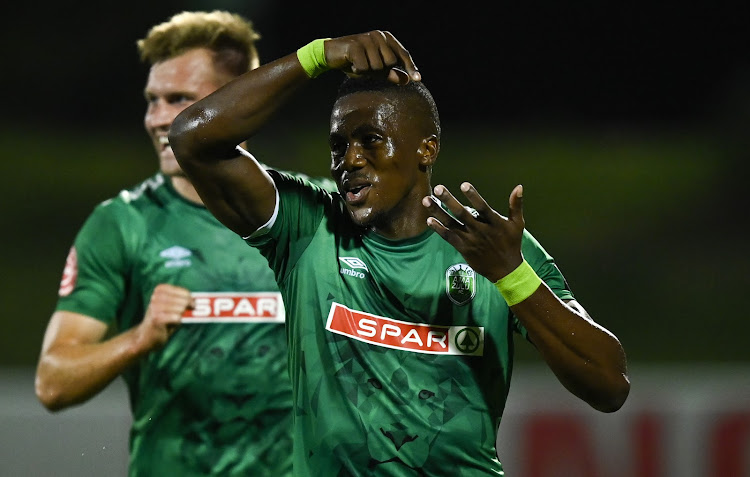 Bonginkosi Ntuli has carried AmaZulu on his broad shoulders since the start of the season and scored a vital goal against TP Mezembe in the DRC yesterday to take his team to the group stages of the Caf Champions League.
Image: Gerhard Duraan/BackpagePix

AmaZulu FC stunned TP Mazembe of DR Congo when they held them to a 1-1 to advance to the group stages of the Caf Champions on the away goal rule after the first leg of the second preliminary play-off ended 0-0 in Durban last weekend.

Bongi Ntuli’s 37th minute goal earned AmaZulu a shock 1-1 aggregate victory over a revered DR Congo side, TP Mazembe, at the Stade TP Mazembe Stadium on Saturday. The defeat (this one on away goal rule) was a second at home for Mazembe in two successive Champions League editions by a South African side.

Bileko Mbaki’s stunning leveller in the referee’s optional didn’t help Mazembe as Usuthu advance through an away goal rule.

Mamelodi Sundowns ended Mazembe’s  74-match unbeaten run in Caf competitions when they beat them 2-1 at the same stadium in the group stages of this competition last season.

Without taking anything away from the gallant efforts of Benni McCarthy’s side, clearly Mazembe are no longer the same force  they were when they won this competition in 1967, 1968, 2009, 2010 and 2015.

The home started well in this match and tested Usuthu goalkeeper Veli Mothwa with a couple of  good shots before Ntuli pounced after a free kick to beat the Malian-born Mazembe gloveman Ibrahim Mounkoro with a low shot on the near post.

It was the heroics of Mothwa though that ensured Usuthu still had their lead going to the break as he produced another brilliant save to deny Arsene Asoze in the dying minutes of the half.

The Usuthu keeper  thwarted Mazembe  again in the second half, though there was nothing he could do to stop Mbaki’s stunner.

Ntuli’s goal was a third in this competition after he scored a brace in Malawi when AmaZulu beat Nyasa Big Bullets 3-2 on aggregate to proceed to the second preliminary round of the play-offs.

With the first leg ending 0-0 McCarthy feared the worst as his side had never played in an artificial that they adapted so well to on Saturday.

McCarthy’s side was unlucky to double their lead in the 67th minute when Luvuyo Memela’s shot came off the upright after it had beaten Mounkoro in one of the rare attacks by the away side in the second half.

Usuthu’s victory could form part a great weekend for SA teams against central African sides in Caf competitions after Marumo Gallants knocked out Mazembe rivals Vita Club in the Caf Confederations Cup with a 3-2 aggregate victory away from home on Friday.

Sundowns  have a great chance of joining AmaZulu in the group stages of the Champions League if they avoid defeat at home today against another DRC side, Maniema Union. The teams played to a 2-2 draw in the DRC last weekend.

Orlando Pirates may also be in the last 32 of the Confederations Cup if they beat Congolese team Diables Noirs at the Orlando Stadium today. The Buccaneers did well not to concede a goal away last weekend in a match that ended 0-0.

AmaZulu FC can follow in the footsteps of Mamelodi Sundowns by becoming the second SA team to beat DR Congo’s TP Mazembe on their home turf in a Caf ...
Sport
1 month ago