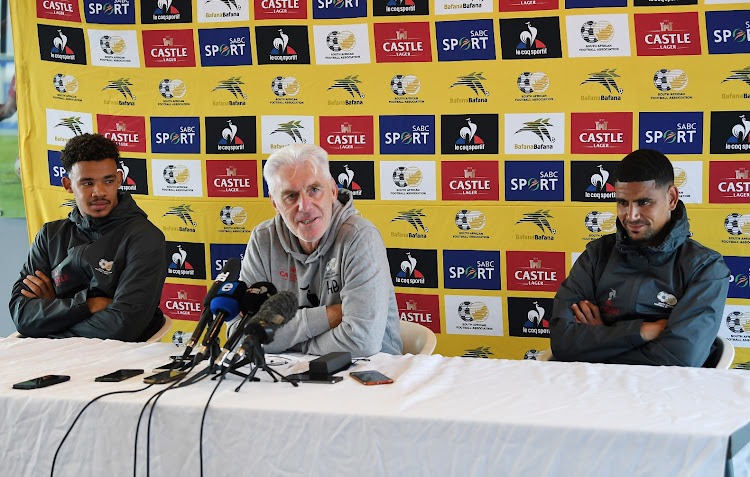 Bafana Bafana have to beat Zimbabwe at FNB Stadium on Thursday night so they can go to Cape Coast maximising the pressure on Ghana in Sunday's final group stage 2022 World Cup qualifier, SA coach Hugo Broos has said.

Broos had always cautioned that a Bafana building towards the 2023 Africa Cup of Nations (Afcon) might not qualify for the Qatar World Cup. But he also said they would give it their best shot.

His emphasis on youth and hungry performances from the new faces has seen SA top of Group A on 10 points and in striking distance of the final playoff round. The coach said beating Zimbabwe, and going to Ghana with a lead, will be crucial for SA to stand a realistic chance of a shock qualification past the Black Stars (nine points).

“It's a different situation to the first two camps we had,” said the 69-year-old Belgian who was appointed in May.

“The first camp [a draw away against Zimbabwe and home win against Ghana] was to know each other better and the next against Ethiopia [back-to-back wins] was successful because we did it in another way.

“Now we face two games that are very important, Uf we win twice we are in the next round.

“But it is simple to say it, it's not so simple to do it. The most important thing is to win against Zimbabwe.

“If we don't we can maybe be one or two points behind [Ghana], and this is not a situation I like. I like to have the same situation after the game against Zimbabwe — one point, maybe two [as a lead].

“And maybe we can even have the best situation where we go to Ghana on a holiday. But we don't think about that at all because I think it will not happen.

“Let's focus on the Zimbabwe game. A tricky game. There are some players who are not there, so I think the coach [Norman Mapeza] chose to prepare for Afcon [2021 Africa Cup of Nations] in January.

“And you know what it means when you give players a chance to prove themselves. That means they will do it.

“We have concentrate and be ready  because we have to win it. One point ahead, two points ahead and the pressure stays on Ghana.”

‘This is cheap’: Bafana boss Hugo Broos hits back (again) at PSL coaches

Hugo Broos has expressed irritation that some Premier Soccer League (PSL) coaches have aired their frustrations about him in the media, saying that ...
Sport
2 months ago

Ethiopia — like Zimbabwe, out of the running in Group A — host Ghana at neutral Orlando Stadium on Thursday afternoon due to their home venue being ruled unsuitable, “which I find an advantage to Ghana,” Broos said.

“Ghana don't have to do the long trip we made and play on that awful pitch [in Bahir Dar]. They come here in a paradise, good hotel, very nice pitch.

“For us, let's win against Zimbabwe. That's the most important thing. And then Ghana — it's a different game to our game against Zimbabwe, because there it's the final game, and it will be them or us.

“It's new for our team, but I'm very confident. We believe in ourselves, there is confidence, and I know it will be very tough for Ghana if we can go there one or two points ahead.”

Broos acknowledged the trip to Ghana would also not be easy, with a “bad pitch also, a little road from Accra to Cape Coast, two to three hours by bus”.

SA did not qualify for the Covid-19-delayed 2021 Nations Cup, with Broos picking young players and omitting a number of older front-line stars in the Qatar 2022 qualifiers to build for the 2023 Afcon.

Bafana Bafana coach Hugo Broos has revealedt he is pleasantly surprised by how quickly his players have adapted to his methods and made a strong bid ...
Sport
2 months ago

Kaizer Chiefs may have won the Soweto derby at the weekend but Bafana Bafana coach Hugo Broos believes Orlando Pirates were the better side during SA ...
Sport
2 months ago

He did not say so in so many words, but Orlando Pirates co-coach Mandla Ncikazi also only thinly disguised his belief that the handling of ...
Sport
2 months ago