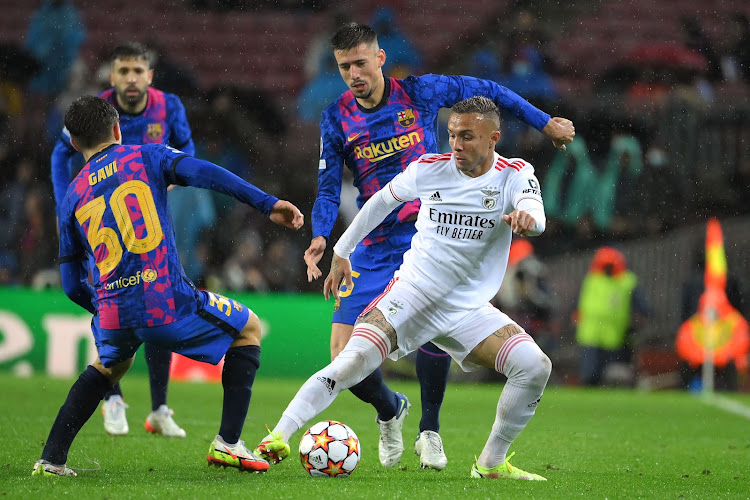 Barcelona will need a draw at worst and a win at best if they are to advance while hoping that Benfica do not win at home against Dinamo Kyiv in the final group matches.
Image: @ChampionsLeague/Twitter

Benfica held Barcelona to a scoreless draw in the Uefa Champions League at the Camp Nou on Tuesday night, meaning the second team to qualify for the Round of 16 from Group E behind Bayern Munich will be decided in the final game of the group stage.

Barca are two points ahead of Benfica with one game still to play, but they face a daunting task in the last group when they travel to Germany to take on Bayern, who have a perfect winning record so far.

Benfica's manager Jorge Jesus had said on Monday that "a draw would be worse for Barcelona" and he was true to his word.

Chelsea manager Thomas Tuchel said he was worried by injuries to midfielder N'Golo Kante and full back Ben Chilwell during their 4-0 Uefa Champions ...
Sport
6 months ago

Benfica defended stoically, closing down attacks with a solid five-man defensive line, leaving Barcelona in control of the ball much of the time - but far away from their goal.

For Barca, however, the match was another disappointing struggle, and they now have just two goals to their name in five games in the group stage of the competition.

Barca defender Ronald Araujo put it simply to reporters afterwards: "We had a great game, the attitude was good, we defended well - it was only the goal that was missing.

"We still have the last game. It’s complicated but not impossible against Bayern."

Manchester United's caretaker manager Michael Carrick said Tuesday's 2-0 victory  over Villarreal in the Champions League was a huge boost for the ...
Sport
6 months ago

Barcelona’s first challenge of the day showed up hours before the game, when a storm hit the city, bringing heavy rain with it, but that didn't put off 49,572 fans from making it to the Camp Nou.

While new manager Xavi appeared to have quickly fixed many issues like the team’s intensity, rhythm, ball control and collective effort, scoring remains a problem.

Barca had 61% of the ball but created only a few chances, including a shot across goal from Yusuf Demir in the first half, a header from Frenkie de Jong after the break, and a volley from Araujo that went in only to be disallowed because he was in an offside position.

Benfica had their opportunities too, but Barca keeper Marc Andre ter Stegen kept out a header from Roman Yaremchuk, while Haris Seferovic failed to score what looked like the winner when through on goal in a stoppage-time counterattack, infuriating his coach.

"In my 30 years as a coach, I have never seen a player miss an opportunity like this.

"Unfortunately, it happened to us," Jorge Jesus told reporters.