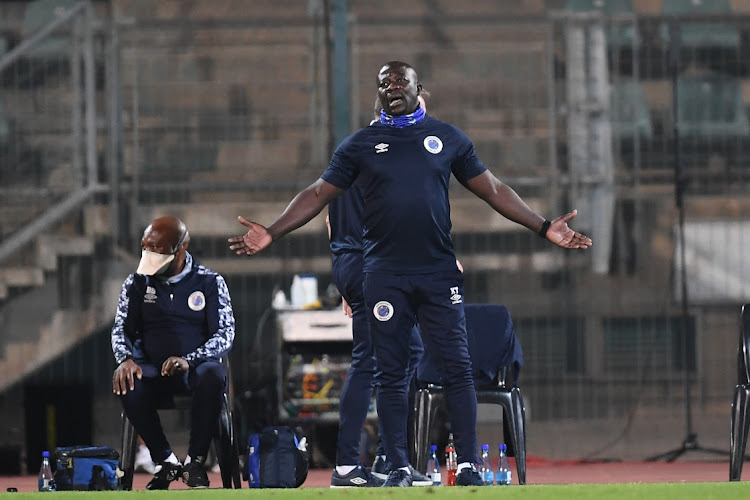 SuperSport United coach Kaitano Tembo admitted that he got it wrong by starting Sipho Mbule in their come-from-behind 2-2 draw with Mamelodi Sundowns at Loftus on Wednesday night.

Mbule, who was a substitute in their last three league matches against Marumo Gallants, TS Galaxy and Royal AM, was elevated to the starting line-up against Sundowns to support Thamsanqa Gabuza and Gamphani Lungu.

Mbule struggled against Andile Jali and Neo Maema, and Tembo replaced him with Jamie Webber at halftime, bringing stability to the midfield and enabling United to launch a strong second half comeback.

“I also have to take responsibility in terms of team selection, I think I made a mistake to start with Sipho Mbule,” admitted Tembo.

“Knowing his condition at the moment, I think he is not in the right condition to start matches and I needed to protect him a little bit more, but I didn’t do that.

“When we took him off at half time and brought in Jamie Webber on the right, we could get on the ball more and there was a little bit of quality in our possession which we didn’t have in the first half.

“Apart from the goal they scored in the second half, we dominated and we managed to get behind and turn their centre backs Grant Kekana and Mosa Lebusa.”

With Webber on the field, United improved significantly with two late goals by Gamphani Lungu and Teboho Mokoena to cancel out Sundowns’ early strikes by impressive Maema and evergreen Peter Shalulile.

“I am happy with the response we got from the team, especially after going 0-2 down early in the game. It was not an easy place to come from behind and get the result, but I was pleased with our second half performance.

“Jamie changed the game for us. In the first half we played backwards and sideways but when he came on we could go forward and we could put our foot on the ball.

“Also when we brought in Iqraam Rayners to partner Gabuza upfront, that gave them problems and something to worry about. You could see that Kekana and Lebusa struggled a little bit with us in the second half.

“Sipho is an important player in our team and I think he is aware of his condition. I took a huge risk to start him because in most of the recent games he has been coming off the bench and playing probably 20 minutes.

“I had a word with him when I took him off because when Sundowns scored the first goal we needed to change because we could not keep playing the same way we were playing in the first half.”

SA football will not strengthen its culture if it does not give more opportunities to qualified coaches from within the country, and while clubs ...
Sport
6 days ago

Mokwena leaps to the defence of Sundowns goalie Onyango: 'Football is a game of mistakes'

Mamelodi Sundowns coach Rulani Mokwena has leapt to the defence of goalkeeper Denis Onyango after his mistakes allowed SuperSport United to salvage a ...
Sport
6 days ago

Ten-man Kaizer Chiefs allowed an opportunity to reduce Mamelodi Sundowns' imposing DStv Premiership lead slip though their hands when they spurned a ...
Sport
6 days ago