Some people have lost livelihoods, others have to travel far to get to jobs that remain and to unaffected malls to shop 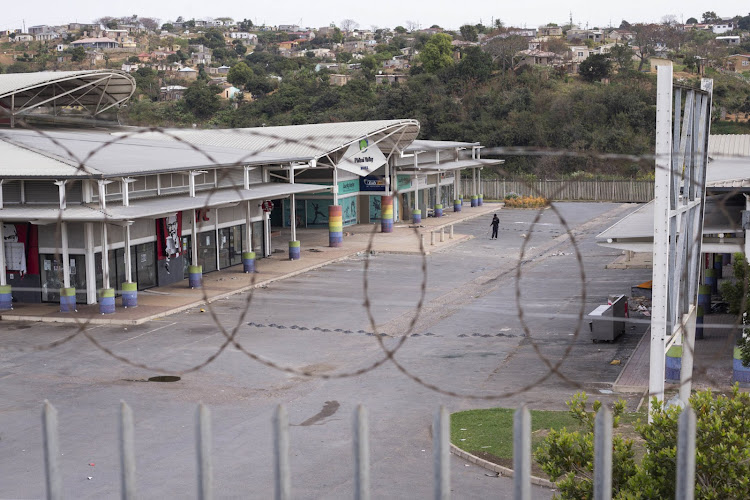 Two months after the July riots, when more than 300 people died in just a few days, communities are still counting the cost.

Thousands of people who lost their jobs as a result of the unrest are feeling the full brunt of a lack of income and many families are struggling to find the supplies they previously got from local shops.

Bongiwe Gcabashe, 63, lives across the road from the Philani Valley Mall in Umlazi, Durban. Before the unrest she walked across the road to collect her older person’s grant, do her banking and shop for groceries.

A fire damaged the mall badly during the riots and it has been shut since.

“Now I have to go as far as Pavilion [22km away] and Windermere [27km away]. I was telling my daughter just now that I don’t have salt and I don’t know where I will get it from. It is even worse because this mall might never open its doors again,” she said. 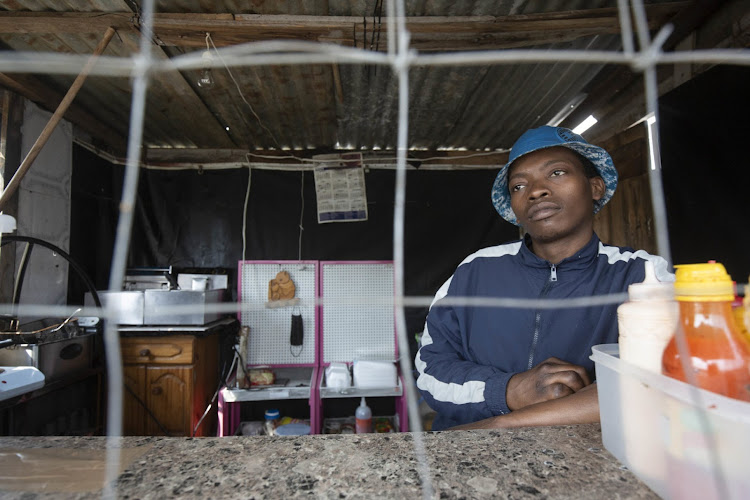 Nkanyiso Mbanjwa, who sells fast food from a stall close to Philani Valley Mall in Umlazi, Durban, lost most of his customers when the shopping centre was torched.
Image: Rogan Ward / New Frame

Small businesses that relied on mall traffic are also affected.

Nkanyiso Mbanjwa, 26, runs a shack shop across the road from the Philani Valley Mall, where he sells mainly vetkoek, fried chips, sausages, other food items and loose cigarettes.

“I used to get flour [to make vetkoek] and other items I sell from the Spar at the mall. Now I have to travel to Isipingo to get these items. Workers at the mall were my main customers. I even gave some credit and they paid when they collected their salaries. Now they are gone. Other customers bought from me because I was close to the taxi rank. Now all that business has dried up. We are suffering,” he said.

Mega City mall in Umlazi was looted, vandalised and partially torched. The Toyota dealership in the mall precinct, the only car dealership in the township, was not spared. Cars were broken into and looted of batteries and other parts, and set alight.

Frank Apprey, 32, manages his brother’s Sedglo hair and beauty salon at the Mega City mall. Their premises were cleaned out. They were robbed of R52,000 cash, he said, as well as 15 chairs, eight hairdryers, nine hair clippers, a flat-screen television and home theatre set, cupboards, relaxer, hair pieces, shampoo and other salon items.

“It has cost us more than R250,000 to rebuild this place. No one is helping us and we have to fix it ourselves. The 10 workers, including four South Africans, who were working here have now lost their jobs. The place was full here before the riots, but now we are lucky if we get two or three customers,” said Apprey, who moved to SA from Ghana.

Aphiwe Nxasana, 24, worked at the Gym Company. She used to walk from Reunion, south of Durban, where she rents a room, to her job at Mega City mall.

“My life revolved around the mall because I was working here, doing my shopping and banking here. Now I am not working. I am now just around at home. The banks and the ATM are closed. Life is hard,” she said.

Nxasana doesn’t know how she is going to survive.

Some of the full-time retail store workers have been moved to non-looted branches around Durban. Others have been told there are no jobs for them.

Anna Mbihli, 39, considers herself lucky to still have a job. She was working at Fashion Fusion at The Ridge@Shallcross shopping centre. After the shop was looted, she was transferred to a branch in the city centre, about 22km away.

“I used to walk from my shack to my workplace. Now I have to spend about R60 [on transport] a day to get to work [and back home],” she said.

The Sasol service station in The Ridge@Shallcross precinct was broken into and stock, tills and other items looted, and the premises vandalised. The owners have partially reopened with a skeleton staff. The service station’s fate is linked to the revival of the shopping centre because most of the motorists who bought fuel there did so as they were driving to the centre.

Gugu Gumede, 31, is a petrol attendant supervisor. She said the filling station had more than 22 members of staff, but only six were working at the moment.

“We now work between two and three days a week. We don’t do much because there is no traffic coming here. We hate what happened and hope it doesn’t happen again. Now we can hardly afford to pay rent for our rooms at the informal settlement, let alone to send money for our parents and children to eat at our rural homes. Worst of all, I shudder to think what will happen to us if the mall doesn’t open and this service station has to close as a result,” she said.

A 31-year-old man from the Bottlebrush shack settlement in Chatsworth, who asked not to be named, said he succumbed to the temptation to loot at The Ridge shopping centre.

“I am not working and Covid-19 has taken away even the piece jobs we were doing. When I saw people going to loot, I also went because I have nothing here. I looted mostly food. My shack is small, so I had to sell some of the stuff I took.”

He said many of the residents who took part in the riots felt guilty and were remorseful.

“We now have to walk for kilometres to Chatsworth Centre to buy groceries and small things.” 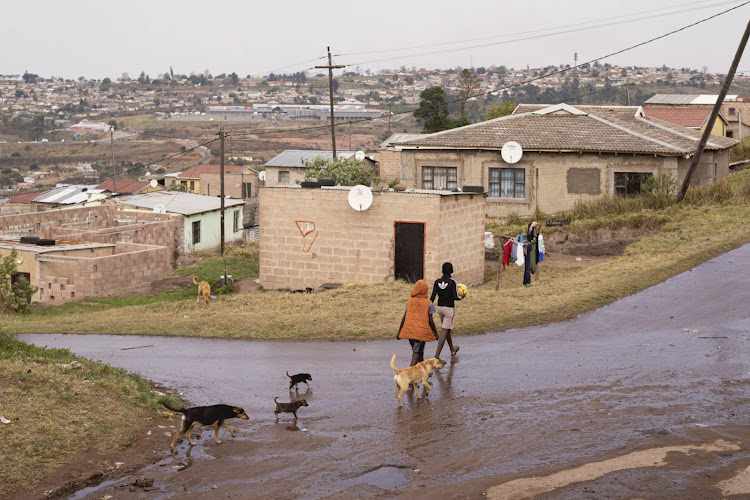 KwaZulu-Natal residents in riot-affected areas such as Umlazi, southwest of Durban, now have to travel far to banks and shops after their local malls were looted or damaged.
Image: Rogan Ward / New Frame

A 27-year-old woman from Umlazi U section, who also asked to remain anonymous, said she participated in looting at Philani Valley Mall. “It was peer pressure, really. I took food items, but now our mall is gone.”

Several towns in KZN were affected in different ways. IFP supporters armed themselves and stood guard to prevent looting in the former provincial capital of Ulundi. But they were too late to prevent the looting and torching of nearby Nongoma, another IFP-run municipality.

There, people among the looters allegedly shot at three youth leaders, including a ward councillor, as they tried to defend the town. They were lucky to survive.

In Ngwavuma, near the border with Eswatini, the Spar and Big11 supermarkets and two furniture shops were among the stores looted. Residents now have to travel to Jozini, 63km away, or Manguzi, 91km away, to buy groceries, do banking and collect their social grants.

Economic losses in the province are estimated at R20bn, while nationally the cost is estimated to be more than R50bn.

Durban Chamber of Commerce and Industry CEO Palesa Phili said it was working closely with the government to fast-track the rebuilding process so residents could use their local shopping centres again.

This article was originally published on New Frame.