The future of connectivity

Perfect for your networking needs, meet two new must-have routers from Huawei: the Wi-Fi6 AX3 and B535 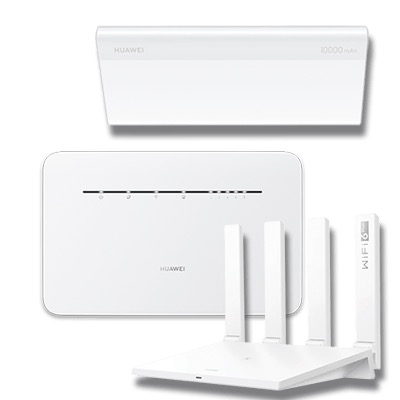 The AX3 and B535 can work together, creating a mesh solution where the two devices act as a single Wi-Fi network, which you can expand with ease.
Image: Supplied/Telkom

They say if you want to get to know someone, to really understand them, put them into a situation with painfully slow internet. There’s nothing more frustrating than connectivity issues and the best way to stay online is with a brilliant router. Huawei has two new options worth considering: the Wi-Fi6 AX3 dual or quad-core router, and the B535 4G Router 3 Pro.

First up, Huawei’s Wi-Fi6 AX3 router is the king of connectivity (and the world’s first Wi-Fi 6 plus wireless router). What exactly is Wi-Fi 6? Simply put, it’s the next (and sixth) generation of Wi-Fi. Also known as 802.11ax, Wi-Fi 6 routers (such as the AX3) are not only faster, they can handle more internet-connected devices.

Huawei’s Wi-Fi6 AX3 router runs at 3,000Mb/s, which is nearly twice as fast as previous Wi-Fi 5 routers. Think of all the things in your home that need internet access — your laptops, tablets, fitness bands, smartwatches, robot vacuum cleaners, video game consoles, smart speakers and more — if they require connectivity, then Wi-Fi 6 is your best bet for both speed and power. It not only communicates with all your devices quicker, it’s more efficient, so it saves power.

Another need-to-know is that Wi-Fi 5 routers and devices communicate with each other through a 20MHz bandwidth. Wi-Fi 6 routers, such as the AX3, communicate through bandwidths as low as 2MHz, which means the signal is much, much stronger. If you’ve ever brought home a new router but still had to invest in an extender or secondary router because the signal just isn’t strong enough, this isn’t the case with the AX3. It’s a Wi-Fi 6 Plus router, which means total coverage, faster speeds and lower latency.

HomeSec is a great feature — a custom-built security system from Huawei with international, financial-grade safety tools which means it’s definitely safe enough for your house, office or whatever working-from-home set-up you have.

Why would you choose a plug-and-play network over the AX3? If you don’t have a fibre line into your home (and aren’t planning on getting one installed), a 4G router is the next best thing. If you have the sort of job where you travel between cities, or you’re renting a property or even going away for a week or two, the B535 4G router is a huge win: with download speeds of up to 300Mb/s, you can still be online and not forced into using slow, pay-as-you-go hotel internet. 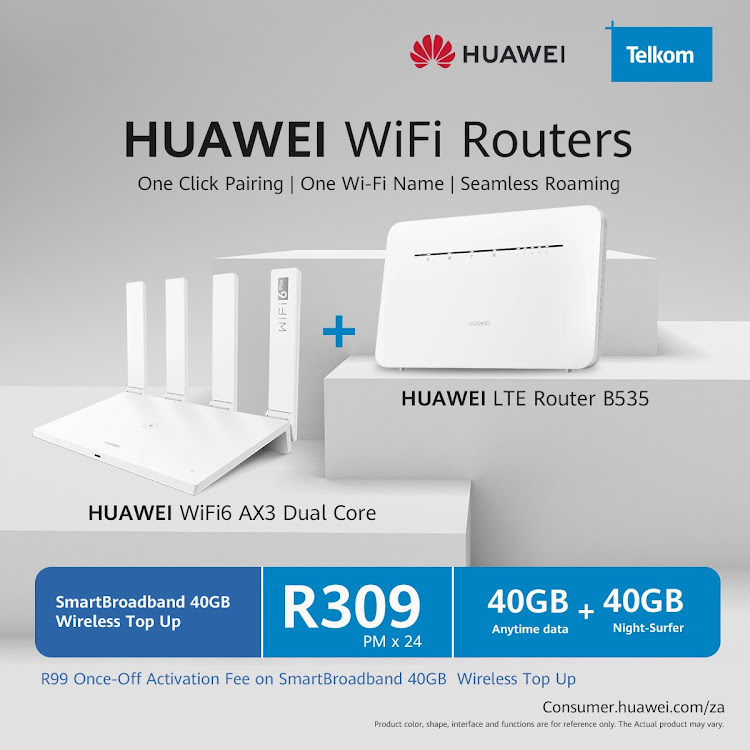 Take advantage of the Telkom deal and get connected.
Image: Supplied/Huawei

Getting your internet up and running with a 4G router is as easy as plugging in your device and inserting a 4G SIM card into the LTE B535 to get fixed wireless broadband services. It’s a lightweight, minimalistic-looking device that offers superior signal strength, and just like the AX3, can connect up to 64 devices without blinking. The AX3 and B535 can also work beautifully together, creating a mesh solution where the two devices act as a single Wi-Fi network, which you can expand with ease. A multi-router mesh solution can only improve your network, and Huawei makes it easy by allowing this to happen under one Wi-Fi name — you won’t need to disconnect and reconnect every time.

For a short time only, you can buy both the Huawei Wi-Fi6 AX3 and the Huawei LTE B535 router at Telkom on the SmartBroadband 40GB Wireless Package. For just R309 x 24 months, you get these two routers, as well as 40GB Wireless and 40GB TM data (40GB Anytime + 40GB Night-Surfer). A R99 activation fee applies.