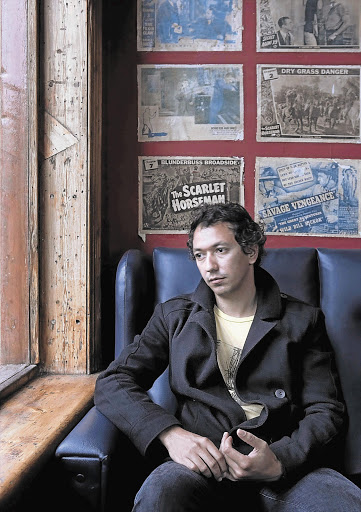 Oliver Hermanus, his face comprised of almond-shaped planes, is engaging in his eloquence. He uses his hands with their spindle-shaped fingers that look as if they have been dipped in cappuccino, in the way that people use their eyes.

He could flirt with these hands; seduce even. He frequently passes them through his mussed-up, liquorish-colour hair.

He is a young man with a strong sense of will, a talent for polemics, a taste for recklessness. He uses the word coloured without palaver. My notebook records him as "hip with no chip and young enough to laugh like a child".

At 28, with a couple of films to his credit, he is the director of Skoonheid, the first Afrikaans film to win The Cannes Queer Palm at Cannes.

"I was surprised because we are not really championing a homosexual image." It is to the film's detriment that is has been classified as a gay movie when it is more than that.

His background is almost too stereotypical to repeat: forced removals, low-paying jobs. If it hadn't been for his father who was a maths whizz, he might have ended up ragged.

"In those days if you were good at maths you could get into the University of Cape Town to do medicine. I can see now how different we are from my cousins, purely because of my father. It demonstrates the power of education."

However, his father experiences white people as unwelcoming. "Recently, I purposefully took him to the most expensive restaurant I could find but he wasn't comfortable. He could have sent me to a private school but he sent me to Livingstone High School. It was important to him that I go there."

Hermanus wanted to be an aeronautical engineer but decided movies were more powerful. He made his first, a horror film called Déjà Vu, when he was 13. "It got a lot of attention and we were on KTV but the film was too violent to be aired. We were too young to see our own film!"

Was your father surprised by the film?

"Yes, he said, 'You are making a film with a cast of thousands and they are all white'."

All this adds to the weird brilliance of making a movie about an Afrikaans Free State family that is set in Bloemfontein.

"It was a city I had preconceived ideas about. It is supposed to be very Afrikaans, very backward, a place where you wouldn't feel good. So when it came to making the film I said immediately, 'Okay, let's go to Bloemfontein'.

"What is interesting about Bloemfontein is that it has the highest rate of homosexuality in the whole country. There is an element of secrecy. You know, behind the rugby stadium is a gay cruising ground, flash your lights twice, that sort of stuff."

The film's storyline spans a few weeks but it evokes a whole life of an Afrikaner family, living with money, few intellectual interests, the rites of suburbia intimately obeyed with its cheap disguises and lack of imagination. The film mines a particular vein of sexuality. Francois, the father and main character, does not regard himself as homosexual, hates moffies, but enjoys having sex with men.

Hermanus did extensive research, using HIV/Aids stats that categorise various forms of homosexual behaviour. "The starting point for me," he says, "was discovering these clubs in the Free State and Durbanville where men would meet to have sex with one another. You have to be married, kissing on the mouth is prohibited and you must be white."

In one scene one of the men brings in a young black boy and is told to leave. "The act of gay sex is considered more vulgar if it is with someone of another race," explains Hermanus. "They have compartmentalised their sexuality. They don't talk about it, just meet to have sex."

Much of the film reminded me of Ingmar Bergman's work, the same exploration of a small community, isolated and bound by mores of their own making, the same closeness to the land with the long shots of Free State countryside. But its plot is more Hitchcock, with an exacting storyline driving it towards a tumultuous climax.

"I have never liked South African cinema because it has always been opinion first, story last," says Hermanus.

The film is slow paced. This, combined with its cinemascope screen, brings it very close, sometimes too near for comfort, a purposeful ploy. "Critics see the slowness as being a result of my inexperience. This annoys me because they do not understand the intention."

The acting is nuanced, told through the eyes rather than words. Deon Lotz as Francois puts on a magnificently crafted performance. "He's a very brave actor, doesn't concern himself with his public image and has worked at his craft for years," says Hermanus.

Francois is the holder of dark secrets, silent, touched by obsessive-compulsive disorder, but finally almost idiotically tragic, tramping up the steps from Clifton beach, holding the iPod he has bought for the beautiful young man he desires (played by Charlie Keegan).

"He crosses the boundary big time in the end," says Hermanus with his childlike laugh.

What did the Europeans make of Afrikaners?

"They know that they ruled the country for a long time and there is the stigma of being inbred."

The irony of making the film was that Hermanus couldn't enter these clubs. "I couldn't go to them because I am coloured. It interested me that, in my own country, my race stops me at the door.

"I will be interested to see if we get any feedback. By this time there must be men who lead this sort of life who will go and see it at two o'clock on a Thursday afternoon and think, 'Oh my god, someone is following me with a camera'.

"Yes," he muses, "Bloemfontein's reaction will be interesting." It is a little bit like lambs to the slaughter for the audience. "Oh well," he shakes his head, "I am not the kind of filmmaker who longs for a positive review from Barry Ronge."