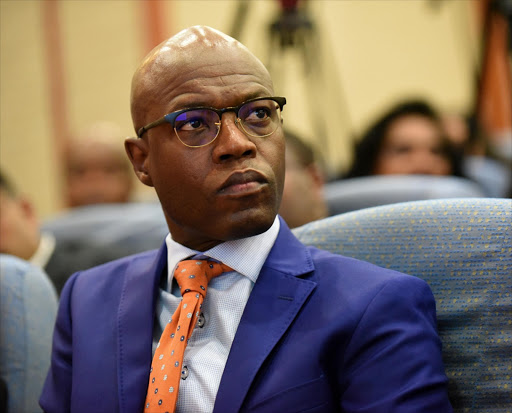 Acting Eskom CEO Matshela Koko was in constant contact with his stepdaughter’s business partner days before and after the power utility awarded multimillion-rand contracts to their company.

This is despite Koko denying that he knew Pragasen Pather, his stepdaughter Koketso Choma’s fellow director at Impulse International.

The Sunday Times understands that the calls are part of an investigation of whether there was a conflict on interest when Impulse International scored contracts of about R1.8-billion from Eskom.

Last month the Sunday Times reported how Choma, 26, was appointed a director at Impulse International last April and over the next 11 months the company was awarded eight lucrative contracts from a division of Eskom that Koko headed until he was appointed acting CEO in December.

Koko, who lives in the same house as his stepdaughter, claimed he did not know that she was a director at Impulse International.

The telephone records show how on April 1 2016 — the day Choma started working as nonexecutive director at Impulse International — Koko phoned Pather at 7.38am. The two  spoke for about two  minutes.

• On August 22 — two days after the  contracts were finalised.

• Two days before a R300-million contract for trunk cabling for the Kusile power station’s unit 2 was signed  in October.

Of the 52 calls between the two, Koko made 36 calls to Pather, and Pather called Koko 16 times.

As group executive for generation, Koko had direct influence on the supply-chain management at Eskom, a division that reported to him.

When asked on March 17 about his relationship with Pather, Koko told the Sunday Times: “I didn’t know anything about Impulse except that they were Eskom service providers. I have no relationship with them, or the CEO, until I found my stepdaughter worked for them and terminated that relationship.”

At the time Pather said: “I don’t know Koko. I only met him at industry conferences.”

Both men changed their tunes this week. Pather  claimed Koko called him for help with load-shedding issues. South Africa did not experience  load-shedding in 2016.

“Most of the calls were work-related as Koko was looking for assistance on how to deal with load-shedding.

“Koko and I have a business relationship, which is between Eskom and Impulse International, which dates back to late 2015.

“I understand the phone calls are under investigation by the Eskom board,” Pather said this week.

On Friday, Koko  insisted that the phone calls between him and Pather were not “unusual”.

“I talk to all suppliers of Eskom all the time. It’s not unusual and Pragasen is the CEO of Impulse International, which is one of our suppliers,” he said.

Koko said the Eskom board had appointed law firm Cliffe Dekker Hofmeyr to investigate the allegations involving him, Choma and Impulse International.

“They are expected to finalise their investigation within a month and we must all respect that process,” he said.

Eskom spokesman Khulu Phasiwe yesterday confirmed that the board had appointed the law firm to investigate the acting CEO.

“They were appointed to get to the bottom of all the allegations against the acting CEO, his stepdaughter and Impulse International,” he said.

Impulse International describes itself as “a multinational engineering and project management, planning and cost management consultancy and technical service provider”. In total it has been awarded close to R1.8-billion in tenders from Eskom since 2014.

Of those deals, contracts of R1-billion were awarded while Choma was a director at the company, a position she  resigned from in October.

Impulse International with Dynamic Instruments, subcontracted by Swiss company ABB, were also among the beneficiaries of a R350-million “demobilisation claim” submitted by ABB to Eskom. The beneficiaries have already been paid R72-million.

Saswato Das, head of external communications at ABB, said the company was going to investigate all the allegations made against it.

“We are currently looking into the matter and at this stage we have no further comment,” he said.