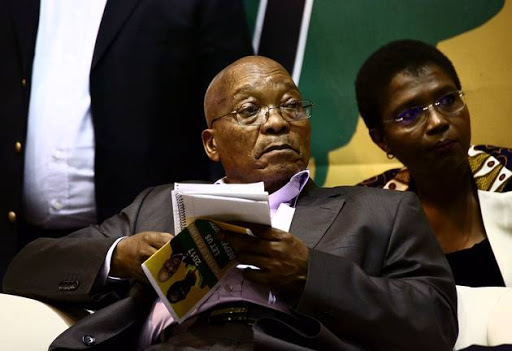 Senior ANC leaders led the charge for President Jacob Zuma to be removed as head of state during the governing party's national executive committee meeting yesterday.

The meeting is expected to continue today, when Zuma's backers are expected to fight for the president's survival.

Insiders said ANC policy guru Joel Netshitenzhe fired the first salvo by raising concerns about the state of the party under Zuma, the lack of confidence society had in the ANC and the growing list of scandals involving the president.

Deputy Health minister Joe Phaahla is said to have backed Netshitenzhe by citing the ANC's disastrous performance during last year's local government elections as a reason Zuma had to be removed.

Sue van de Merwe, a former deputy minister of international relations, and others also joined the charge against Zuma.

Leaders, who spoke on condition of anonymity, said Zuma loyalists stood up for their man.

Umkhonto weSizwe Military Veterans Association chairman Kebby Maphatsoe, a Zuma backer, is said to have told the meeting that calls for the president to go were "nonsensical".

By the time the meeting had adjourned at around 6pm yesterday, it was unclear which side enjoyed majority support.

Zuma opened the meeting yesterday by delivering his political overview, which was described as "superficial".

Sources said a proposal was tabled to select 10 senior leaders to form a panel to adjudicate on the calls for Zuma to go.

"There is consensus that a team of 10 people be put together to work out proposals. There are motivations for him to step down and not stepping down. So the group would have to look at the balance of evidence and then make a recommendation," a source said.

This comes after a call for a secret vote on Zuma's future was shot down, with the majority of those at the meeting saying the NEC did not traditionally vote on matters.

A Zuma sympathiser who was at the NEC vowed to block any attempt to vote on the matter.

"We won't vote. You can't remove a sitting president.

"We could not debate Zuma's report, he said nothing. The real issues came in [Mantashe's] report," the source said.

Mantashe told the media yesterday that Zuma's removal was not on the agenda, but the call was made regardless of this.

The anti-Zuma faction was confident that it enough numbers to gain a consensus on the president's removal, but his supporters said his detractors were not raising anything new.

Zuma is said to have sat silently during the meeting.

Part of the strategy to remove Zuma through the NEC meeting was to point out the growing number of scandals involving the president and his friends the Guptas since the last discussion on his fate took place at an NEC meeting in November.

"Most people, even the president, [are] saying six months is not long ... let him see out his term ... We are saying we can't do it. The country cannot afford it. Look how much damage was done since November. And we are not only talking about the reshuffle," the source said.

In November, Derek Hanekom, who was tourism minister at the time, tabled a motion for Zuma to step down, but it was defeated.

Since then, Zuma reshuffled his cabinet, firing five ministers, all off whom are NEC members, and one deputy minister, without consulting ANC leaders.

Moody's Investors Service placed the country on review and is expected to make a rating decision on Friday.

The source said Gordhan raised concerns at the meeting but did not make an open call for Zuma to be removed.

On the controversy surrounding the reappointment of Brian Molefe as Eskom CEO, the meeting supported Mantashe's call for the decision to be rescinded.

The NEC meeting was scheduled to start on Friday, but began yesterday morning with Zuma's political report.

NOT KNOWN WHERE THEY STAND