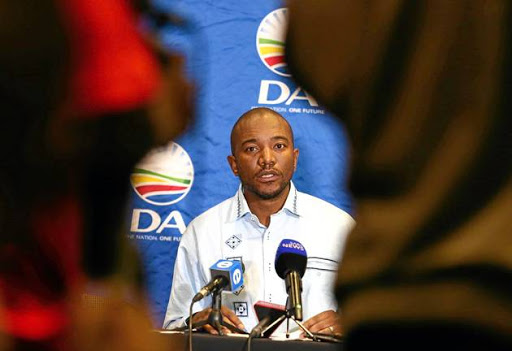 DA leader Mmusi Maimane's rush to have his predecessor Helen Zille suspended has left the party with egg on its face.

It emerged yesterday that the party had flouted its own constitution.

In a bid to flex his muscles and show that he was in charge of the party, Maimane convened a press conference at OR Tambo International Airport to announce that Zille's party membership has been suspended.

But Zille immediately hit back, issuing a statement saying she would "not be bullied into resigning or incriminating myself".

She then accused the DA of flouting its own constitution by not first giving her an opportunity to make representations on why she could not be summarily suspended.

Realising its mistake, the DA then issued a further statement saying it had only written to Zille "to signify its intention to temporarily suspend her".

It said she had 72 hours to submit reasons why she should not be suspended.

Maimane said yesterday that the party's federal executive had decided to suspend Zille from all party activities pending her disciplinary hearing on charges related to her colonialism tweets.

But Zille denied this yesterday.

"I have apologised publicly. What I have not agreed to do is plead guilty to charges of misconduct, which I never committed."

She said she would not accept being found guilty before the hearing.

"I cannot be bullied into resigning or incriminating myself."

Insiders said the decision to keep Zille as premier was influenced by a legal opinion tabled at the meeting. It contended that Zille could not currently be removed as Western Cape premier.

Although Zille previously said she had turned down those who had tried to persuade her to stand for the position of leader of the Western Cape, the intended suspension means that she will also formally not be eligible to stand for any position in the party. She will also be banned from speaking publicly on behalf of the DA until the disciplinary hearing against her has been concluded.

Maimane had been under pressure to act against Zille from within and outside the DA to show that he was in charge.

But the decision is expected to cause divisions within the party and among supporters because she still enjoys support, especially from the party's white constituency.

Insiders said Maimane put up a case to suspend Zille before the executive's decision because she repeatedly defied him by turning down his requests for her to apologise for her tweets in March that praised colonialism.

Madikizela, who is also the MEC for human settlements, was Zille's communications officer during her tenure as Cape Town mayor.

This week she cleared him of allegations of impropriety after contractors trading with the provincial government treated him to a lavish birthday party at a Cape Town hotel.

A provincial leader who preferred to remain anonymous said it was a tense two-and-half-hour meeting.

"The meeting was very different from your usual [executive]. It was tense - you could cut the tension with a knife.

"At the same time, everybody clearly felt free to speak their minds.

"No one was left in any doubt about where anyone stood," the leader said.

At times, tempers flared during the meeting, with sources saying there was a moment of ill temper between Madikizela and national DA spokeswoman Phumzile van Damme.

Approached for comment, Smalle said the discussions at the meeting of the federal executive had been difficult.

Asked to explain how Zille was expected to govern without engaging party structures, Maimane said she would be guided by the DA's manifesto from the 2014 election.

"We've got a manifesto. We've sent her to the provincial government to implement that and there's a governance unit that she'll work with," he said.

The DA's federal legal commission is now expected to expedite its disciplinary process against Zille after it has been stalling for the past seven weeks since she was charged.

Her disciplinary hearing is scheduled to start on Friday.