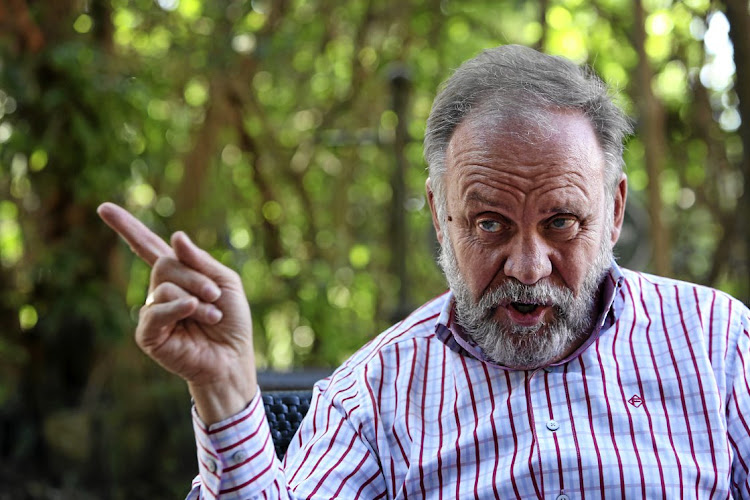 Carl Niehaus, a spokesman for the Umkhonto weSizwe Military Veterans Association, was caught in a similar scam in 2011 when he borrowed money to pay for his father's funeral while his father was still alive.
Image: Jackie Clausen

Disgraced political spin doctor Carl Niehaus "killed off" his mother in an elaborate hoax to wriggle out of paying a R4.3-million debt.

Niehaus owed the money to a former landlord for the rental of two apartments in Sandton, damage to expensive furnishings and artwork, unpaid concierge charges and interest.

In an audacious bid to avoid legal action, he claimed that his mother had died and he would soon receive a generous inheritance, 90% of which would allow him to settle the debt.

His mother, Magrietha Niehaus, 88, is in fact alive and living in a home for the elderly in Johannesburg, other Niehaus family members said.

Niehaus concocted reams of what appears to be fraudulent correspondence and paperwork to back up his claim, including a series of e-mails between him and a "director" at Sanlam named Diane de Beer.

But Sanlam said the letters were forgeries and that no one by that name had ever worked for the insurance giant.

Chris du Plessis, an insurance broker who is named in Niehaus's papers as being the executor of his mother's estate, told the Sunday Times that Magrietha was "very much" alive and living on the West Rand in Gauteng. She is one of Du Plessis's clients.

Niehaus, a spokesman for the Umkhonto weSizwe Military Veterans Association, was caught in a similar scam in 2011 when he borrowed money to pay for his father's funeral while his father was still alive. His father, also Carl, has since died.

"This is a legal matter. I will deal with it legally. I am not prepared to comment about it," he said.

Asked if his mother was alive, he replied: "I'm not prepared to comment on this matter. I am not saying anything else." He then hung up.

Niehaus, who lately re-emerged from the shadows of financial scandal to become a vocal campaigner for ANC presidential hopeful Nkosazana Dlamini-Zuma, has a history of lies and bad debt.

He is also a proponent of Dlamini-Zuma's radical economic transformation policy, and yesterday he was on stage at a "victory rally" for her in Durban.

His former landlord, a South African businessman based in the US who did not want to be named, is contemplating legal action.

Niehaus had to resign as ANC spokesman in 2009 after it emerged that he had forged the signature of former deputy finance minister Jabu Moleketi and racked up huge unpaid debts, including loans from many party heavyweights.

When Niehaus emerged as a political commentator on the ANN7 news channel in June, Derek Hanekom, a former cabinet minister and a member of the ANC's national executive, tweeted: "Carl Niehaus is a liar and a con artist."

This is a legal matter. I will deal with it legally

Niehaus's debt of R4.3-million arises from a multiyear lease that he signed in 2006 for two adjoining luxury apartments. At the time he was a director of a Swiss company, whose interests he represented in South Africa.

It later emerged that Niehaus had not been authorised to sign personal rental agreements on behalf of the company.

Niehaus provided copies of a will, with himself as a beneficiary, and even a detailed estate inventory to the landlord to back his claim of an inheritance being due.

To explain the long delay in getting an estate registration number against which a claim could be filed, Niehaus concocted an elaborate series of e-mails from "Diane de Beer" to himself. In the correspondence, he blamed a serious IT breakdown at the Office of the Master as the reason for the delays, and forwarded these to his former landlord.

The letters detail the estate registration number and identify a "Chris du Plessis of Key West Brokers" as the executor of his mother's estate. The letter is dated April 3 2017 and is also addressed to Niehaus's sister Susanna Erasmus, who is the other heir.

Contacted on Saturday, Erasmus confirmed that their mother was alive.

"It's not true [that she is dead] and you should get your facts straight before calling someone. It's very upsetting to say. I don't know anything at all about what my brother is saying."

Sanlam corporate office manager Susann Scorgie said the matter had been referred to the company's legal and forensics department for investigation.

She said Sanlam had no estate registered in Magrietha's name.

Niehaus's subterfuge was discovered in April when the landlord's attorney tried to file a claim against Magrietha's estate with the executor and found that the story had been fabricated.

Carl Niehaus, once the voice of the ANC, is a man for whom the struggle has never ended
News
4 years ago

• In 2003, Niehaus told an East London travel agent that he had had leukaemia and needed a R100,000 holiday in Mauritius with his wife and two children. He only paid R20,000 of the bill. "He played on my emotions," said the agent.

• In the same year, he left a senior job at Deloitte and Touche. He said his financial woes had become "embarrassing".

• In 2004, Rhema Bible Church asked Niehaus to resign as CEO and spokesman, saying he owed it more than R700,000. The church said the money was repaid shortly afterwards.

• The same year, he had to repay a loan of R24,000 to the Rev Frank Chikane, who was then director-general in the Presidency, after leaving his job there under a cloud.

• In 2005, Niehaus forged the signatures of several top ANC officials, including then Gauteng MECs Paul Mashatile, Ignatius Jacobs, Khabisi Mosunkutu and Angie Motshekga, while he was CEO of the Gauteng Economic Development Agency.

• In a prenuptial agreement with his third wife late in 2008, Niehaus listed his personal wealth as R12.5-million. The couple separated in 2012.

• In 2009, the University of Utrecht in the Netherlands said Niehaus had lied on his CV about having a doctorate in theology from the institution.

• The same year, Niehaus admitted to having borrowed money from senior ANC figures, most of whom he had not repaid. He also said he had asked to be put in touch with Brett Kebble because he was "desperate for financial help".

• The Sunday Times reported in 2009 that Niehaus was facing eviction from his R45,000-a-month Midrand home because he owed his landlord over R300,000. The paper published SMSes from Niehaus in which he blamed the ANC's "serious organisation challenges" for payment delays.

• In 2011, Niehaus lied to then deputy justice minister Andries Nel that his father had died. He borrowed money from Nel to "transport the body" from Somerset West to Zeerust in North West. - Additional reporting by Tanya Steenkamp