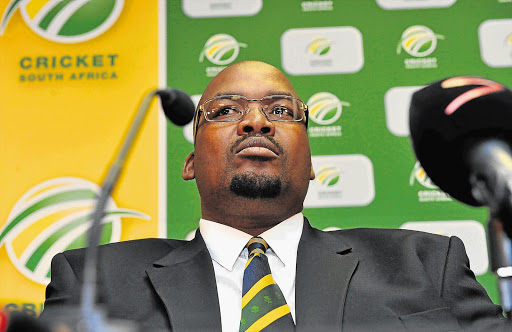 Cricket SA president Chris Nenzani had planned to exonerate CEO Thabang Moroe last year on behalf of the board in a prepared speech, but had a sudden change of heart during a board meeting.

The Sunday Times is in possession of Nenzani's December 2 signed speech where he accepted blame on behalf of the CSA board for the organisation's fiasco and exonerated Moroe with regards to the CSA step-in rights decisions and relations with the SA Cricketers' Association (Saca).

Nenzani was to deliver the speech at a media briefing on December 3, but that was rescheduled to December 7.

Nenzani chaired a board meeting on the night of December 3 where the executive shed responsibility for the organisation's administrative mess and slapped a "precautionary suspension" on Moroe on allegations of misconduct. Moroe was suspended on full pay on December 6.

Cricket SA (CSA) president Chris Nenzani says he is in the process of responding to a letter sent to him by the Central Gauteng Lions (CGL) cricket ...
Sport
1 year ago

This revelation follows last week's report where the Sunday Times established that the terms of reference into Moroe's investigation were changed to focus on the suspended CEO instead of the board.

In his unread speech, Nenzani wrote that Moroe made "decisions in line with the applicable delegation of authority".

"There is a view held by some influential journalist that he is taking decisions to advance his own personal interests. This allegation is actually saying he is on a frolic of his own at the expense of CSA.

"This view is totally false, misleading and mischievous.

"The board and I have confidence in Thabang as the CEO and the board has noted the personal attacks that are sometimes directed towards him in his personal capacity."

CSA sent out a press release on December 3, containing Moroe's "unreserved" apology for the administrative chaos.

Moroe's lawyer, Michael Motsoeneng Bill, said he was "surprised" by how Nenzani and the board had made a U-turn. "My client was expecting some form of an apology and a level of a confession from the board."