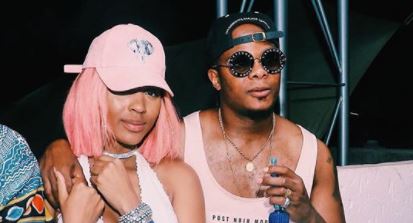 Bandile and Nadia have been pictured together.
Image: Via Bandile's Instagram

After first claiming that they are only friends, Major League DJz' Bandile Mbere has confirmed to TshisaLIVE that he is dating rapper Nadia Nakai.

The pair sparked rumours of a romance earlier this week when Bandile posted a snap of himself with his arm around a happy-looking Nadia, alongside the caption: 'vibes right now'. It was the latest in a series of pictures of the couple together.

Speaking to TshisaLIVE, Bandile first denied that they were anything more than friends.

A few moments later he confirmed that they were a couple.

"We are dating. We have been dating for nearly a year now. We wanted to just clear all the speculation."

He said that it was not a publicity stunt and they fell for each other after working together.

"We were just so close from always working together. She is just such an amazing person to be around. She is down-to-earth. She brings out the best in me."

Always working..... Inspired so much by the work she puts in 🏆

Zodwa Wabantu may have been told to tone down in certain aspects during her on-stage performances by her boss and mentor, DJ Tira, but that certainly ...
TshisaLIVE
4 years ago