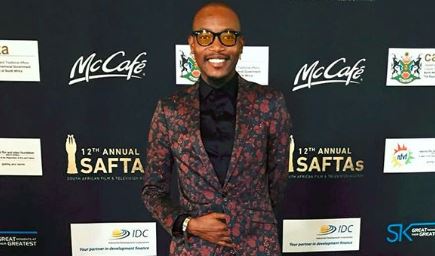 Moshe Ndiki poked some Xhosa tweeps when he posted pictures of himself at initiation school.
Image: Via Instagram

Despite the vast disapproval of many Xhosa men to the controversial film Inxeba and the threats they've endured since its release, Moshe Ndiki, a proud gay man fearlessly posted his initiation school pics.

However, not one to care about other people's opinions, Moshe posted pictures of his younger self covered in white paint and another with the traditional white and red blanket used at the traditional Xhosa initiation school.

"They used to call me initiate Tyra (Banks)," Moshe wrote as a caption with laughing emojis.

Other people were pissed off and most of the insults were thrown in isiXhosa at the Uyangthanda Na? presenter.

Some even disowned Moshe saying he isn't a true Xhosa man.

However, Moshe was quick to let them know... he has zero Fs to give.

To all those that feel offended by This post, here’s a message for you ❤️😘 pic.twitter.com/oomurZ183W

But other people joined in the fun and applauded Moshe for not being afraid to share his pictures, even though he knew they may be misconstrued as "disrespectful" to the culture.

This are some great memes hy pic.twitter.com/KFMaBD2Izm

This is gonna be Me kulo December😹😹😹 pic.twitter.com/gJ2sW8z7G5

Jonga Y'all are angered buy this 🤣🤣🤣 I bet y'all get angered by pep store selling this red and white blankets. pic.twitter.com/zRGUl6t9wg

Papa Penny said the Samas were full of tribalism.
TshisaLIVE
3 years ago

"She hasn't been eating and she's really falling apart," said an insider about Mshoza.
TshisaLIVE
3 years ago

Thuthukani Mvula will appear in court later this month on assault, intimidation and pointing a firearm charges.
TshisaLIVE
3 years ago

Bongz is not happy with Childish Gambino biting his moves.
TshisaLIVE
3 years ago